3 1970 Chevrolet Corvette Has Been Sitting for Too Long, Nice Surprise Under the Hood

4 What If... Mazda Turned the MX-5 Miata Into a Sporty Electric Crossover?

When it comes to how safe the LS V8 should feel inside a Chevrolet Corvette's engine bay, the answer is "very." Not only does it provide a more than an adequate match for America's favorite sports car, but the cult following of this model means that anyone who even thinks about taking it out for anything other than boosting its power somehow will instantly get death threats in the mail.
8 photos

However, every car goes through this tricky patch during its life where it's not old enough to be considered a classic, but enough years have passed to make it outdated, if not even obsolete. A lot of people would do unthinkable things to get their hands on a stock 2006 Chevrolet Corvette and cherish it once they do, but for others, it feels like that car has lived its life, and it's time to make a decision: either turn it into a project or get rid of it.

Just to make it perfectly clear, I have no idea about the backstory of this particular build, but I feel as though everything said so far sounds quite plausible. I mean, there are still plenty of ways to make your C6 Corvette unique without swapping the LS, but replacing it with a Mazda-sourced (where else?) rotary engine is a guaranteed solution to turn the vehicle into a one-of-a-kind piece of automotive goodness.

The owner of this C6 wasn't happy with a straight swap - oh no, that would have been too easy. Instead of slotting the two-rotor RX7 engine in there and calling it a day, they decided to turn it into a rare three-rotor unit with a big single turbocharger bolted on top before letting it rest where the LS normally resides. Then, as if the sound alone wasn't enough to let everyone know something wasn't right about this particular 'Vette, they also completely removed the hood to expose the successful transplant.

Well, whether or not it was indeed a success will always remain debatable, but as long as the end product is something you enjoy watching - and, above all, hearing - I guess it has to qualify as such. Besides, just like some people claim about actual human organ transplants (or was that only in the movies?), it would appear the recipient borrowed some of the donor's traits as well. I'm talking about its thoroughly entertaining inability to drive straight. Sure, the driver's skills are far off those of someone like Ken Block or any Japanese master drifter, but the contradictory visual and audio stimuli in this video are enough to confuse our brains into enjoying the spectacle regardless of any slip-ups.

Don't bother hitting "play" if your sound is muted. 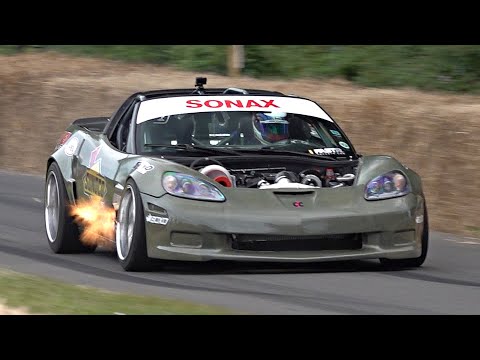