4 Katherine Legge Does Donuts in 2017 Acura NSX, Hoons It Like Her GT3 Racecar

2005 Honda NSX Is Still Faster Than a Civic Type R

Mihnea Radu
The old sports car versus new hot hatch thing usually ends badly for the former. As turbocharging and launch control get better and better, the icons of our past start to look slow.
2 photos

However, that's not what happens in this drag race organized by the UK's Carwow channel. We honestly thought that the Civic would win, as an NSX with "NSX" number plates probably belongs to Honda's heritage fleet.

So it's staged, and the newer, cheaper car is faster, right? Well, no, it's not. Mat mentions that 2005 NSX produces 280 horsepower from its VTEC V6 engine. However, the power war was going on, and every Japanese car that claimed to have 280 HP produced more.

The new Civic Type R theoretically has the power advantage, as its turbocharged 2-liter engine delivers a tower of low-end torque. However, it's at an obvious traction disadvantage.

When it accelerates, the back pushes down and that combined with the placement of the engine makes the tires stick like glue. The Civic Type R does the opposite thing, losing some grip at launch.

You'd expect that torque compensates, but the old-fashioned VTEC engine has another boost, and that's the fact that it lets you hold gears. By the end of the runway, the hot hatch has clawed back some of the lost ground, suggesting it does indeed have a little more power on tap.

So which should you buy? Well, that's a silly question, considering a mint-condition NSX like the one in the video costs about four times more than the Civic. So actually, you really are getting a performance bargain. It's just not going to be faster what was a Ferrari fighter over a decade ago.

More turbo boost probably won't fix this, but Honda might eventually have to jump on that AWD bandwagon. So, see you in another four years? 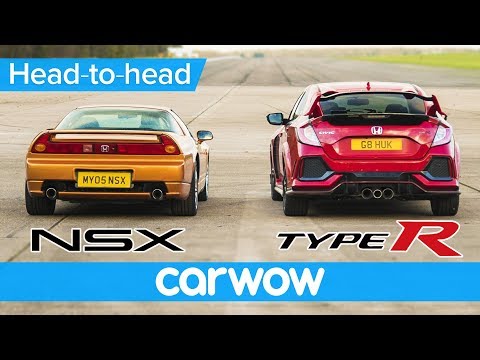