2003 Ford Mustang Cobra Has More Power Than a Shelby GT500, Is a Real Juggernaut

Imagine going back in time to 2003. You're at a stoplight in your brand new Ford Mustang Cobra SVT, codenamed "Terminator." There are very few cars on the streets, at the same price, which can be intimidating to you. A brand-new BMW M3 would have had almost 40 less horsepower than you. A 2002 Camaro would have been even slower.
62 photos

But fast forward to 2021, and you can just order a 760-horsepower Mustang if your bank account is up to the task. So a 390-horsepower Mustang Cobra from the early 2000s is not going to be as imposing as it used to be. But with a few tweaks here and there, your 2003 Terminator can become a real road-going juggernaut on four wheels. And while this might look rather inconspicuous at first sight, wait until you get a look at the engine bay.

Because the supercharger on this thing has more displacement than most European or Japanese vehicles you can buy today. A Honda Civic Type-R comes with a 2.0-liter engine. A BMW M4 has got a 3.0-liter engine. The Whipple supercharger in this Terminator Cobra is a 3.4-liter unit! And seeing that it feeds a 4.6-liter V8, the result is enough to make GT500 owners think twice before lining up against this thing.

According to the dyno sheet included with the sale, this Mustang is now rated for 830 horsepower, so don't be surprised if it's capable of doing 10-second quarter-mile (402-meter) runs with the proper kind of rubber on the rear wheels. You get 18-inch rims in the package, and looking through the spokes you get a glance of the slotted and vented brakes, and that is just what you would want out of a car that can hit 124 mph (200 kph) without breaking a sweat.

In 2003 you could get the Terminator Cobra for about $33,000, but this one also comes with receipts proving that an additional $60,000+ has been spent on upgrades alone. That's because you don't just get up to 830 horsepower without a full engine rebuild. This V8 now has racing injectors, a Crusher inlet tube, methanol injection, and upgraded dual exhaust, which you can hear in the video provided by the seller. The six-speed manual transmission comes with improved reliability thanks to a McLeod twin-disc racing clutch.

The interior is pretty much stock except for a few gauges and the Hurst short-throw shifter, but stock bucket seats should be good enough if you don't plan on taking this to the track anytime soon. With it having the fully-independent sports suspension and upgraded G-Force half-shafts, this SVT Cobra could prove an interesting drive around a propper race track if anyone has the guts to unleash all that power anyway.

It also has the standard amenities inside, so if you don't mind being a regular at the gas station, you could pretty much daily it too. Just take my word and don't stand behind the car too often because race gas exhaust fumes can lead to a sore throat and dizziness, depending on how often you've been around highly-tuned vehicles like this one. With 44,943 miles (72,238 km) on the clock, the asking price for this 2003 Ford Mustang Cobra SVT is $53,995. 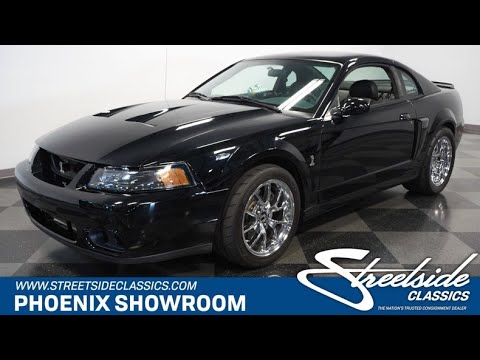