1 This Is the World’s Most Expensive Aventador SVJ Roadster, Thanks to $12M Plate

2 Look Away, Unless You Want To See a Man Hand-Paint a Lamborghini Aventador SVJ

5 Stripped Supercar Used To Be a Lamborghini Aventador S, Now It’s a Superleggera
Up Next

Cyclocopter Has a Unique Approach to Generating Thrust for Flying

2001 Lamborghini Diablo Will Have You Selling Your House

Whenever I'd go on long road trips, my companions and I would play all sorts of games. I'm talking about simple games, where you'd ask everyone else a difficult question. If you could choose to drive or own just one Lamborghini, which model would you go for? And that would lead to a half-hour debate, depending on individual preferences.
31 photos

Of course, one of the factors that will decide the answer to that question is your age. I assume anyone that's about 20 years old will most likely choose the Aventador, or even worse, the Urus. Just as I imagine that if you were born in the late '70s or early '80s, you might be crazy about the Countach. So I guess that having fully enjoyed in the '90s when I was growing up, my answer would be: the Diablo.

Maybe it also has to do with the fact that the Diablo managed to achieve more impressive performance figures than any other Lamborghini before it. And I can't help but recall Richard Hammond's impression of the Aventador. While he was having fun behind the wheel, he did note that something was missing: "a kind of Stockholm syndrome...I miss that feeling that the car is trying to kill me".

Audi came into play in 1998, when it took Lamborghini over from its former owner. And before producing the Murcielago, it decided to modernize the Diablo. And that led to the VT 6.0 and VT 6.0 SE. One last hoorah for the mighty Diablo. Less than 3,000 Diablos were ever built, but these two final versions are only a fraction of that number. The SE is slightly rarer, with 44 units. But the VT 6.0 isn't too common either, at 337 units.

If that's not special enough for you, learn that just 136 cars were built for the United States market. Still not enough? Reportedly, just two of these cars were finished in Monterey Blue, and you'll have a hard time finding another one that's up for sale. But if you're located in Missouri, you're in for a surprise. Because this 2001 Diablo VT 6.0 is looking for a new home and is currently residing in Saint Louis.

This is one of the last Diablos to ever come out of the factory, as the Murcielago was introduced in 2001 as its successor. There's a five-speed manual gearbox inside, and I can honestly say that I'd be terrified to push this thing to its limits. Even more so considering it only has 19,000 miles (30,577 km) on its odometer. Some of you may be excited to know that Valentino Balboni himself has signed the underside of the rear hood.

The current owner bought the car from Los Angeles five years ago and has since spent $50,000 on bringing the car to its current state. I guess we can all agree that not keeping track of these expenses may be better for your sanity at the end of the day. There are still some minor imperfections here and there, but that's what happens when you drive your cars.

Also, the Sony head unit is somewhat questionable when looking at the whole package, but I guess that's not going to be a major concern for anyone. There are 10 days left until the auction is over, and the highest bid right now is $226,000. Do you think it will go for more than half a million dollars? There's a short driving video included in the ad. And that alone may be enough to have you considering the option of selling your house in order to buy this. 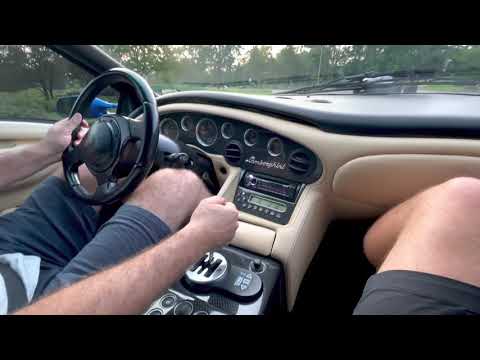