Daniel Patrascu
We are not sure how many movies and books depict such a scenario, but losing all of the world’s satellites in a single blow is something sci-fi writers seem really concerned with. And probably so should we, given how it’s thanks in part to satellites that we can enjoy a lot of things in this world.
6 photos

In most of these writings, satellites going offline and then the ensuing mayhem on Earth is all that happens. But what if these pieces of human-made hardware did not stay in orbit, but head back down to Earth for whatever reason?

It is a hypothetical situation considered by the guys over at What If for their most recent doomsday scenario: 20,000 satellites taken out by an unspecified disaster, raining down on the planet.

The number is an estimate, of course. The Union of Concerned Scientists (UCS—yes, there is such a thing) says there are close to 3,400 satellites in an active state and another 3,000 or so simply space junk. But the reality is no one knows how many really are up there, given all the secrecy that surrounds military space operations.

No matter what the real number is, it’s big, and it will get even bigger now that SpaceX is doing business in orbit. That would be around 20,000 of them after Starlink is fully operational, and such a large number of objects falling down to Earth would be a hell of a lot worse than the 100 tons of dust and sand-sized particles that hit the atmosphere of our planet each day. And there are several reasons for that.

First would be the fact that satellites are a lot larger than the dust and sand that make up those 100 tons. That would make them a bit harder to be destroyed by our atmosphere, and a lot of them (impossible to say how many) would get through pretty much intact.

Then, a good chunk would fall into oceans, given how our planet is one massive body of water, while others would hit land, possibly even inhabited areas.

While they do this, the world as we know it would end, as most of the things we get for granted would stop working: no more internet, no more TV, and, most dangerously, no more GPS—not for cars, bikes, planes, anything.

And that’s not even the most dangerous part. That would be the nuclear-powered satellites still up there, about 30 of them, all but one of Russian make, according to Business Insider. If these make it through the atmosphere (and even if they don’t), it’s pretty much game over, given all the radiation they can give out.

How much radiation? Well, consider this. Back in 1978, the malfunctioning Soviet Kosmos 954 satellite scattered debris over northern Canada, on an area of 124,000 square km (48,000 square miles) in size. It took the Canadians fours months to sweep the area, and they found twelve large pieces of satellite, ten of which radioactive. One of these pieces had large enough levels to kill a person if that person had been in contact with it for a few hours.

Starting off at the premise that many of the satellites falling down would be radioactive, What If says at the end of it all that “Earth would look like it had been hit by thousands of nukes.” That’s probably not the case, but if such a thing were to occur, it would probably not be good for anyone.

Luckily, the chances of all the satellites falling down are slim to none. And even if they did, their different altitudes would mean they would fall down very slowly, giving us enough time down here to prepare and blow them out of orbit. 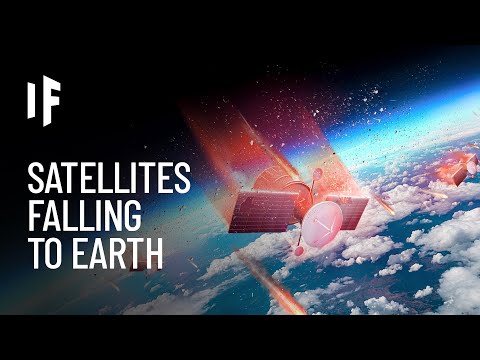