4 Charger 392 Drags Infiniti Q50 Red Sport in the Damp, One Is Definitely Quicker

Because everyone is lacking the time to enjoy everything, a lot of great action gets condensed into just a few seconds of footage these days. Even more so when drag racing is involved, since by definition the quarter-mile runs are complete after just a few seconds. So, let’s go to the polar opposite and have a 15-minute break...
40 photos

It's not going to be void, though. Instead, the good folks over at That Racing Channel on YouTube have decided to follow the exploits of a specific competitor during the recent MITM Elite event which took place July 21st to 24th at the World Wide Technology Raceway in Saint Louis, Missouri. And it seems they placed their bets on the winning horse, Mustang pun intended.

Of course, we are not dealing with your ordinary Blue Oval, even though it keeps the 5.0-liter Coyote credentials and it’s still completely legal to be driven on the street. The rules of engagement for the MITM Elite Street Class specifically called for all competitors to go for a 30-mile (48 km) cruise before the actual racing (a short POV of that ride starts at the 3:25 mark).

And don’t think for a moment that street doesn’t mean wild. This Coyote-powered Mustang has been upgraded by Real Street Performance to around 2,000-wheel-horsepower and has a massive twin-turbocharged setup under the hood. It’s definitely going to need it, as among the competitors in the class was also the (in)famous Big Block Chevy “Green Mamba” Mazda RX-7, as far as we can tell.

But let’s not jump to the conclusion just yet. There are test passes to be seen from the 2:10 mark, a Caddy run that gives us a measure of the Mustang’s potential (7.36s to 7.98s win), as well as another encounter (from the seven-minute mark) before advancing into the semi-finals. The epic green-on-green Mamba vs. Coyote encounter takes place from the 9:40 mark, and it’s a legendary one for sure.

The Mustang driver knows very well this is a make-it-or-break-it moment, so the Ford nails its best performance with a 7:22s pass. In the end, it was enough to snatch the win against the RX-7's very close 7.34s result. With that performance in the pocket, the finals against a Corvette brought the trophy with a flawless 7.35s to 8.73s run! 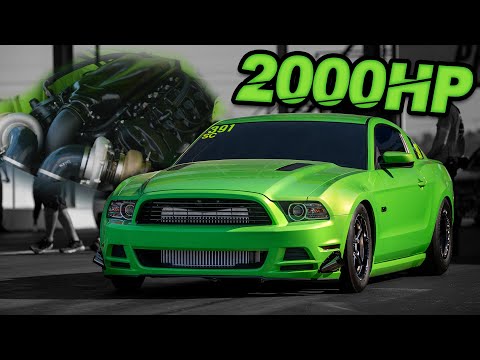