First Major Hurdle for Return to the Moon Is Called SLS, Rocket to Be Removed From the Pad

Sebastian Toma
Back in 1999, Honda released the S2000, a roadster that became a cult classic. Despite selling over 110,000 units, the Japanese manufacturer did not follow up on the S2000, which ceased production in August 2009. Ever since, all examples have become a bit more sought after than they were before.
6 photos

At the time of its introduction, and even many years later, Honda's F20C motor came with the highest specific output for a naturally aspirated unit.

It was only surpassed by the V8 in Ferrari's 458 Italia, but nobody can take the S2000's 123 horsepower per liter away. The motor also had the company's VTEC system, but not everyone was happy with the output.

As always, there will be someone wanting for more thank what the factory provided, and supercharger and turbocharger kits were developed by various companies, not to mention DIY conversions made by individuals. There are even EV conversions.

While the high compression motor did provide a few headaches when adding forced induction, there were also impressive gains at play if things were done right.

This example has been turbocharged, and its new peak output is double what it had when it left the factory. According to its owner, this 2000 Honda S2000 provides 520 metric horsepower, as well as 510 Nm.

In stock form, this model would have sprinted from naught to 100 kph in 6.2 seconds, while its top speed would have been 241 kph. More than enough for the time, as well as for a roadster.

Its new top speed is now claimed to be 275 kph, which is a big hike from its stock capabilities, but that is not the only thing that has changed. With all these modifications, the S2000 still has kept its highs and lows, as you can observe.

For example, this model was known for a precise gearshift action, but it was also renowned for having a rather cramped interior. The latter does not go away no matter how much horsepower you throw at it, but it might not matter to you if you are not bothered by that aspect. 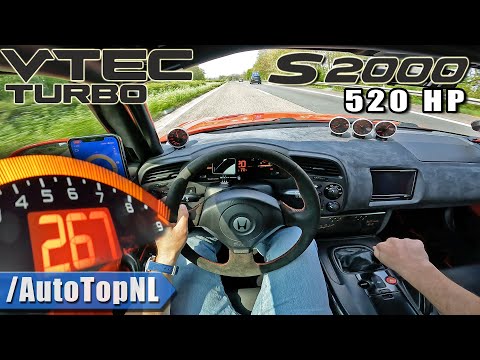