Only a few years ago, this might have sounded crazy, but it’s here now – the first head-to-head, high-speed race without the actual racing drivers. Autonomous vehicles will soon be competing against each other at the Indy Autonomous Challenge, an event that will probably be remembered for years to come.
8 photos

Back in 2004, the Defense Advanced Research Projects Agency (DARPA) Grand Challenge paved the way for autonomous vehicle development. Now, some of the innovators who have competed in that challenge are taking things further as advisors for the Indy Autonomous Challenge (IAC). Organized by Energy Systems Network and the Indianapolis Motor Speedway, IAC is addressed to university teams from all over the world, who will compete for the $1 million grand prize.

Hundreds of students from over 40 schools entered the first stage of the challenge. As of this month, the 10 final teams have been established, with more than 200 students from 19 universities. One of the most fascinating aspects of this historical competition is that all the racing cars will basically be the same, so it won’t be about the build or the technology, but about maneuvering and making essential decision in a high-speed context, such as avoiding unanticipated obstacles.

At the beginning of this year, IAC unveiled the autonomous car model that will be used in the competition. The modified Dallara IL-15 was retrofitted with hardware and controls for increased safety and performance. On-board computing, high-end graphics processing units (GPUs), AI acceleration and drive-by-wire are just some of the highly-advanced components that were included.

One of the most interesting elements is the vehicle-to-vehicle communication system. For multi-car racing, it was essential that the vehicles would be able to communicate with each other, simulating what drivers can observe during a race. This meant focusing on shared signals like track location, ground speed, acceleration and braking rate.

Paul Mitchell, President of Energy Systems Network, said that “The Dallara-built IAC racecar is the most advanced, fastest autonomous vehicle ever developed.” If that’s the case, a race with 200 mph top speeds it the right place to prove that.

In just a few months, on Ocotober 23 2021, this high-speed robo-roce will take place on the Indianapolis Motor Speedway. 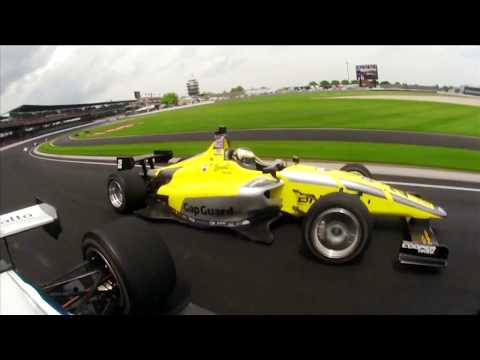