1999 Toyota Altezza Comes With Six Cylinders and a Big Turbo, Is a Real Sleeper

When most people think about a sports car or at least a reasonably fast car, they will most likely envision something along the lines of a coupe or perhaps a convertible. Although over the past few decades we've seen quite a few fast sedans and wagons, you somehow wouldn't expect a four-door Lexus to provide a terrifyingly fast driving experience.
21 photos

But someone with a trained eye, and ear for that matter, will recognize that there's something fishy about this Toyota Altezza/Lexus IS because the exhaust note is that of a six-cylinder, turbocharged engine. Even though Toyota did install a 2JZ-GE straight-six into this model, it did not come with a turbocharger attached to it.

This 1999 model used to have a 2.0-liter engine at first, but it has since been replaced with a non-VVTI 2JZ unit, which just happens to have a decent size turbo attached to it. Although the seller of this vehicle did not specify any performance figures, given the fact that the turbo is an HKS GT Pro 3037, we wouldn't be surprised if the engine output was in the 500-horsepower neighborhood.

Of course, several supporting mods reinforce our previous statement, as the car also comes with aftermarket injectors, believed to be SARD 650CC, a Blitz Intercooler Kit, and an oil cooler kit, to name just a few. As with any respectable build of this scale, the engine bay is not the only one to have received upgrades. The car now has larger Lexus brakes front and rear and aftermarket LSD and HKS Hipermax coil-overs.

The reason why you could instantly tell there's something special about this car is that it features a Blitz Nur Spec exhaust system, which might have you engage in wide-open throttle through every single tunnel you encounter in your path. Interestingly enough, with the 2JZ swap, the former owner also installed a JZX110 R154 transmission, which should be sturdy enough for you to drive like a madman, especially considering you'll also have an HKS twin-plate clutch at your disposal.

Not much has been done to the exterior of this vehicle, and it does look very inconspicuous in this color as well. This Altezza now features a set of aftermarket rear lights that work nicely with this vehicle. The fender arches have been modified only slightly for better clearance, and there's also a sunroof to make the whole driving experience even better.

Inside the cabin, you'll immediately notice the SARD Stack 8100 digital dash, the Blitz Boost gauge and Boost controller, and the HKS FconV Pro, all of which serve to remind you that you'd better pay attention when pinning the throttle to the floor.

This Altezza is advertised as a streetcar, and although it could probably go sideways quite easily, you might want to look into getting a new bucket seat and a few other drift-specific mods. If you look up Nobuteru Taniguchi, he drove a pro drift spec Altezza back in 2004 and 2005, but that didn't necessarily go well for him. The mileage of this white Altezza is pretty good at just 22,780 km (36,662 km), and the asking price stands at 2,200,000 JPY ($20,188), as this car is located in Japan. All in all, this is kind of like a four-door Toyota Supra, for those of you who also need to drive the kids to school in the morning. 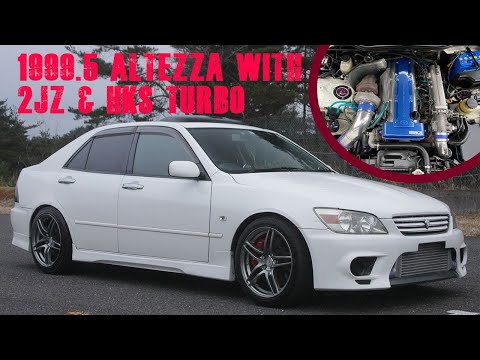