2 Tesla Model D Project Still Moving Along, There Are Challenges to Overcome

5 Cummins Unveils a Combustion Engine That Could Run on Any Fuel, It's the End
Car video reviews:
Coverstory

How much boost is too much? What about how much torque is too much? Well, the real answer is that it depends, but this 1998 Dodge Ram with a 5.9-liter Cummins diesel might get close to the answer that would make most people say "that's too much."
12 photos

The vehicle in question has been tuned as if there's no tomorrow, but it still retains its stock interior, as well as a relatively stock-looking exterior.

Without stickers or anything flashy on its body, apart from a side-mounted exhaust pipe that sits in the right wheel well, a pick-up truck like this might be confused with something that has been lightly modified, at most.

Some might dismiss it as being just a lifted truck on different wheels, and maybe with a different exhaust, but things change once the engine is on, and you hear the compound turbo setup spooling.

Yes, you read that right, this 5.9-liter (360 cui) Cummins turbo diesel comes with a compound turbo setup, which means that a smaller turbocharger is feeding a larger turbocharger. As Xzibit might say, we heard you like turbos, so we put a turbo to spool your turbo, yo!

The result means triple-digit boost figures, namely 100 PSI (ca 6.89 bar), which required extensive modifications across the board. With that much boost on tap and a dash of nitrous, this 1998 Dodge Ram is capable of up to 1,800 lb.-ft. (ca. 2,440 Nm) of torque, while its peak output is also in the four-digit range.

While a diesel truck build might not be your cup of tea, it is still impressive to see a vehicle of this category with 1,100 horsepower on tap. The owner had decided against removing the A/C, which would have only made sense for a race-only build where every ounce of weight would have mattered, but this is not the case.

As you can observe, the 1998 Dodge Ram can generate two kinds of smoke, while its soot looks contained, given the circumstances. If we had to choose between a Carolina-squatted truck or this high-power build, we would go for the latter any day. 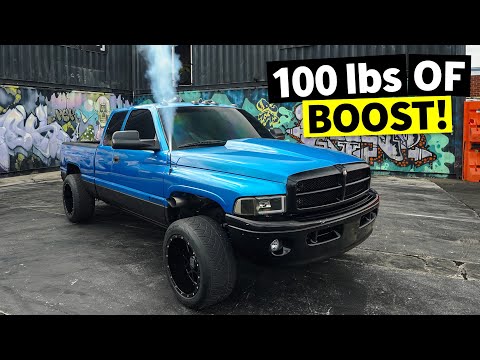