Hey, we would better snap out of the amazement trance really quick because there are a few other highlights to discuss for this GMT400 truck residing proudly in the inventory of a specialized classic car dealership from Sherman, Texas.
20 photos

Before it entered the current Silverado age, Chevrolet’s fourth-generation GMT400 iteration of the legendary C/K series represented the last hurrah for the beloved OBS (old body style). So, in case you are a General Motors enthusiast who only has eyes for such vintage attire but still wants to live a near-contemporary, almost modern truck lifestyle, perhaps this unit from PC Classic Cars will be the right Emerald Green one for you.

It was born for the 1998 model year around a quarter of a century ago but only rode around town and on the highways for a total of 42k miles (that’s almost 68k kilometers, for anyone not speaking Imperial metrics). During that time, it underwent a string of enhancement interventions, though, to complement OEM highlights such as the Vortec fuel-injected 350ci (5.7-liter) V8 engine.

For example, the “solid body” now rides bagged on 20-inch Boyd wheels, the hard tonneau cover’s color is matched to the truck and has a shaved tailgate, while up front there is also a cowl hood. Meanwhile, the C1500 Extended Cab’s factory cloth interior (with bench seating) was also enhanced with a custom sound system and even features a dash-mounted screen with a PlayStation connection.

Additionally, the list of creature comforts includes the powered steering/disc brakes/door locks and windows, as well as a cold-blowing AC system. Last, but not least, the 350ci we mentioned earlier is not alone in sending power to the wheels via the ubiquitous 4L60E automatic transmission and instead is supplemented by a Vortech V-1 supercharger.

Plus, this truck is not going to break the bank, given the rather restrained $29,500 asking price. 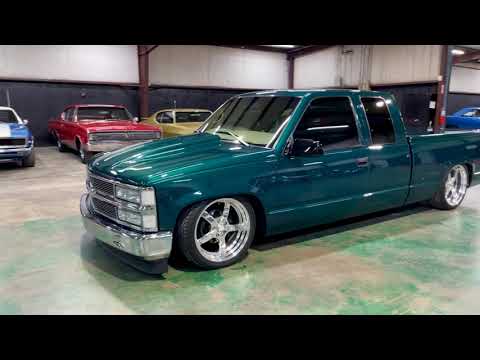