Modern electric vehicles are faster than you would expect them to be. With so much torque at their disposal, even family-oriented EVs can be quick off the line, and many of them have a shot in a drag race against conventional sports cars of today, as well as of yesteryear.
9 photos

With that being written, few people were ready for a serious drag race between an electric Kia and a V8-engined Ferrari, where the Italian model was not seen as the obvious winner. Instead, the electric vehicle has a couple of advantages up its sleeve in this race, but it does have an Achilles' heel.

While the EV will have significantly more torque than the Italian sports car, and its driver does not have to change gears, it will weigh more than the Ferrari. Weight will slow it down, and it will also limit what it can do around corners, as well as during braking. The Ferrari will thus have an advantage from the start.

In the real world, where the EV driver can just punch it without thinking twice about the risk of ruining a clutch or without having to focus on shifting gears, things may take a turn in favor of the Korean EV. Or, at least, that is how many occasional drag races might end.

However, there is still an element of chance, as well as the potential to nail each shift just right, which makes the case for the Ferrari F355 to shine against a vehicle that is 27 years younger than it. Yes, this also needs to be considered, as the Italian vehicle has aged quite a bit, and it still can throw a punch in a fight, despite being a quarter of a century old.

Now, we are not going to ruin the drag race for you by giving away the result, but we can say that it was interesting to watch. Go ahead and see for yourself below. 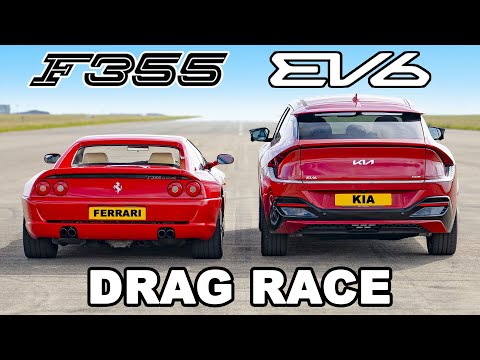