Affordable, fast, and reliable Japanese sports cars took over in the 1990s. You couldn't open an auto magazine without reading how they were better in some way than European exotics. However, where the Supra returned over a year ago, Mazda is unable to revive its iconic model.
4 photos

The RX-7 will forever be remembered as one of the most special Japanese models. Most of that has to do with the powertrain, sounding like a barrel of angry wasps, a dentist drill, or a barrel of angry dentist wasps.

We've always thought some RX-7 models looked stunning. But the JDM fantasy may have been to blame, as YouTube artist TheSketchMonkey has plenty of negative things to say about it just before starting one of his famous modernization renderings.

According to him, the RX-7 suffered from the "melted cheese" design of the 1990s. While that could be an accurate way of describing a Corolla or even a 2001 Monte Carlo, we think it's unfair. The Mazda's organic lines flow about as nicely as a Porsche 911 of that era, which is not to say it's perfect.

Modernizing the esthetics of a 1994 RX-7 requires a few obvious cosmetic changes. Trim pieces such as the reflectors and the panel gaps need to be adjusted to modern production standards. Also, while the rotary sports car looks fast standing still, a diffuser and some side skirts are needed to bring it closer to the ground.

Once the LED lights, bigger wheels, and aero are added, the brightly colored photo begins to resemble a smaller, tighter-proportioned Mercedes SLS AMG or the Dodge Viper. It's not a coincidence. While Mazda used a tinier engine, the front-midship layout is at the core of all three cars and dictates how they handle.

Overall, this isn't the type of rendering that gets RX-7 fans hyped up. They're more into body kits and multi-turbo dragsters. This is more about the Mazda sports car's revival, which probably can only happen with a six-cylinder engine under the hood. 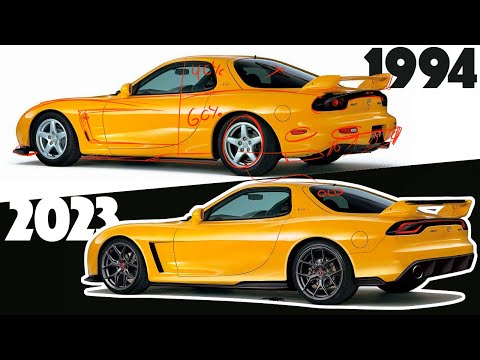