Sebastian Toma
If you have a yard with enough space available, or a place where you can store a vehicle for many years without spending too much money or even nothing at all, try to avoid doing that. Because if you will, you might end up with a car that has not been moved in 15 years, and that would be a shame.
8 photos

Larry Kosilla of AMMO NYC was called yet again for a disaster detail, and this time his patient is a 1991 Volvo 240 Wagon. People refer to this model as the Volvo 245 because it is a five-door station wagon on the Volvo 240 platform. It was one of the models that made the Swedish brand's reputation for safe vehicles be a thing throughout the 90s and early 2000s, when other models took that role upon themselves.

This vehicle has not been washed or even driven in 15 years, which is a lot by any standard. Fortunately, the family who owns it has decided it can have a better fate than being sent to the junkyard and getting turned into razor blades or something like that. Instead, they want to get it cleaned up, fixed, and then sold, with the money obtained from the sale donated to a charity.

Those of you who have seen other vehicles left in a forest for more than a decade know that things will happen to some components. Wires will get chewed by various animals, rubber hoses may crack, and the upholstery will have an awful smell because of all the moisture that has entered the vehicle without the chance to dry properly.

Regardless, these disaster detailing videos would not be as interesting if they only involved pristine vehicles. This one gets to be even more interesting than the usual detailing process because someone is attempting to fix the Volvo while it is being cleaned up.

We are not going to spoil the video for you, so go ahead and watch it until the end to see how the car turned out, as well as if they managed to get it running. 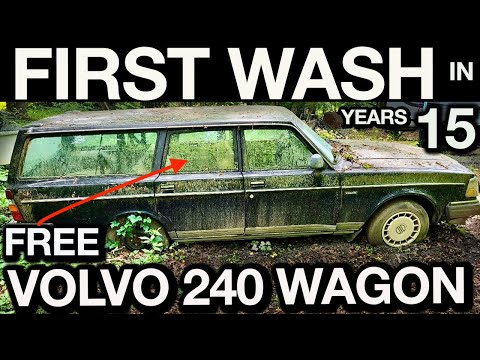