Aurel Niculescu
Back when the Mercedes-Benz W124 series was not yet officially known as the first of the E-Class kind, the German automaker decided to collaborate with a fellow Stuttgart peer.
23 photos

Since it is Mercedes-Benz that we are talking about, no matter how unlikely this may seem today, there was really no other alternative than the fellow luxury peers from Porsche. And because the latter were sports car-oriented, the only possible outcome was an elegant yet bonkers, sporty Benz. And so, it was the ripe time for the birth of the Mercedes-Benz 500 E, a high-performance version of the W124 sold for just a few years with a 5.0-liter M119 V8 good for 322 hp.

It may not sound like much by today’s standards when even the Mercedes-AMG C 63 S E Performance has a turbocharged inline-four hybrid formula that means 671 horsepower of executive sedan business. But it was still enough to scare the bejesus out of the competition (and some rookie drivers) as well as secure a place in the pantheon of cool 1990s cars.

The model was also enshrined into the hearts and minds of various automotive enthusiasts, with one of them in particular also capable of doing something about this passion. So, here is Marouane Bembli, the virtual artist better known as TheSketchMonkey on YouTube, who is nostalgic about the bonkers Mercedes 500 E created with Porsche and has decided that his “dream Mercedes E-Class” deserves a proper (AMG) redesign.

Naturally, the latest behind-the-scenes making-of video (embedded below) also contains a lot of ‘small talk’ related to the various E-Class and AMG incarnations that appeared during the three-decade period between the arrival of his 1991 Mercedes-Benz 500 E favorite and today’s AMG atmosphere. Then, from the ten-minute mark, for better or worse, he finally proceeds to the CGI redesign. So, after watching the transformation, does it get our digital hall pass, or not? 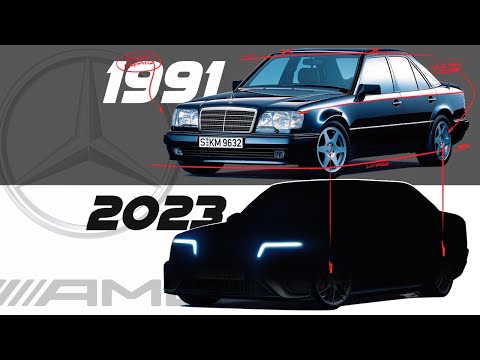