2 Man Drives One Million Miles in His Volvo, Gets New One, but With a Catch

1990 Volvo Wagon Spent the Last Ten Years in a Field, Will It Still Start?

Older Volvo models have a passionate fan base, and they also have a reputation that is directly linked to the reason their fans love them so much. Some people who like youngtimer Volvo models appreciate them for their design, while others have a thing for them because of nostalgic reasons.
7 photos

It is also worth noting that Volvo introduced one of its estate models, the 850, in the BTCC, and its flying bricks, as they were dubbed, managed to gather enough attention for the brand, as well as the model.

Now, the vehicle seen in the photo gallery and in the video that is embedded below is not an 850 but a 740 GLE.

It comes with a 2.3-liter inline-four-cylinder engine with 16 valves, and this is one of those models that have made the Swedish marque reputable for its safety and durability.

With all that in mind, Alex Kersten was offered the opportunity to buy a 1990 Volvo 740 GLE by one of his subscribers. The vehicle in question had not been moved in ten years, and it spent that period in a field.

The owner of the vehicle, who is the subscriber's grandfather, figured out that the vehicle will spend a prolonged period in the wild, so he had the inspiration to remove the brake pads from it before leaving it in a field. The idea was to prevent the pads from rusting shut to the calipers.

The clutch was also removed since it was due for a replacement anyway, and the challenge was on for Alex to attempt to start and then fix the Volvo. Joined by his friend, Gareth, the team attempted to start the old Volvo after ten years without a single crank.

We will let you see if the Swedish wagon managed to start after a decade in the field. Before placing your bets, consider that a fresh battery is available, as well as fresh gasoline, both of which are imperative for the job.

Regardless of the outcome, you should know that Alex has already bought the Volvo, so we will be seeing more of it in the next videos on the channel. 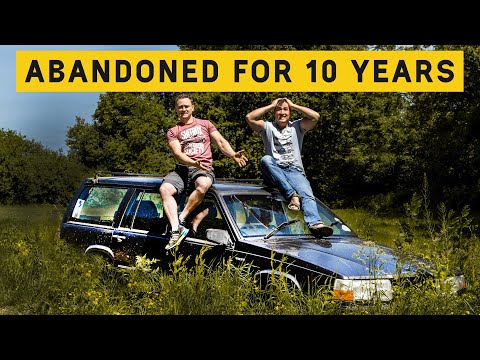