2 This Guy Made a Mazda MX-5 Miata Out of LEGO, Could Become an Available Set

Sebastian Toma
Sometime in July 1990, someone bought a new Mazda Miata and only drove it for 1,500 miles (ca. 2,414 km) over the course of three years. So far, not that exciting, right? Well, that vehicle was kept in a garage whenever it was not driven, and it has not been driven since 1993.
8 photos

Unlike other vehicles that have not been driven in almost three decades, this one has had its oil changed regularly, as well as its battery, and the garage it was kept in did not leave any room for the elements.

In other words, the vehicle was cared for all these years and stored in a garage that did not have any rats, broken windows, or anything else besides dust that could get on the vehicle.

Sadly, the owner of this 1990 Mazda Miata passed away, and his estate decided to send the vehicle over to Larry Kosilla of AMMO NYC for full detailing.

Once detailed, this first-gen MX-5 will be sold to the highest bidder, which is why the way this vehicle looks is essential to obtaining the most out of the sale.

According to the current managers of the vehicle, the soft-top was never lowered, which may be bad news for the fabric or the mechanism. It just makes us sad that someone once got an MX-5 but never bothered to drive it with the roof down.

The saddest part of the story is that its only owner, and perhaps its sole driver for so many years, will never know what their vehicle was like with the top down.

The owner of the MX-5 seemed to have loved the car, as it has clearly been washed often, and there are signs that it was frequently waxed. As Larry pointed out, this may be a good thing, but it also means that there is wax to clean from various places, including ones where it should not have been, such as the turn signals.

Another thing that Larry noted is the fact that detailing a vehicle like this, which is closer to being new than used, is more difficult than doing a disaster detailing, as the work that needs to be done is almost the same, if not even with more effort, while the result cannot be that surprising to the owner.

Its potential customers will also look at it with a magnifying glass, so the pressure is on to do the best possible detailing job for this 1,500-mile Miata.

Hopefully, its new owner gets to experience it with the top down, at least once, before storing it as a time capsule for decades to come. After all, anyone can get a heavily used NA Miata, but nobody can get a 1,500-mile 1990 Miata. 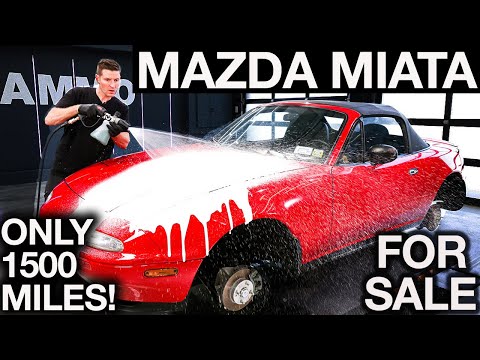