2 Doug DeMuro Reviews One of the Rarest Audis on the U.S. Market, It's Not What You Think

5 The Quattro Spyder Turns 30 and We Still Can’t Forgive Audi for Not Releasing It
Car video reviews:
Up Next

Bugatti Chiron OEM Front End for Sale in the U.S., Costs a Ridiculous Amount of Money

1990 Audi 200 quattro Sings the Inline-Five Song of Its People, Has a Sad Story

Audi's range was significantly different over three decades ago, but that can be said for most manufacturers on the market. At the end of the 1980s, Audi was riding high on its results with the early models that came with the quattro all-wheel-drive system, which led to a few interesting models.
7 photos

One of those cars is the Audi 200, also referred to as the Type 44, and it is based on the Volkswagen Group's C3 platform. This model was an upmarket version of the Audi 100, and it was offered in more powerful variants. The vehicle seen in the photo gallery, as well as in the video below, is a Type 44Q, which also came with the company's all-wheel-drive system.

The example in question is a restomod, and the modifications have brought it to 479 metric horsepower (472 hp) on the dyno. The power hike was achieved using a bigger turbocharger, a coil-on-plug ignition system, a modern electronic engine management system, and numerous other bits and pieces meant to keep everything in check.

The best part about the restomod is that it comes without any flashy exterior modifications. Except for a set of timeless BBS wheels, a stainless-steel exhaust that is considerably larger than the stock unit, and a shiny brown paint job, there is nothing on the exterior of this Audi that could make someone believe it is not entirely stock.

Well, once you see it accelerate away from you on the highway, as well as hear its inline-five-cylinder turbocharged motor roar, you will quickly realize that there is something changed under the hood. As its owner noted in the comments section, the vehicle has been upgraded so that it can rev up to 8,000 rpm, as well as provide 850 metric horsepower (838 horsepower).

Currently, the vehicle only revs up to 6,300 rpm, where it makes 1.2 bar of boost, but an external wastegate should allow it to reach its full potential, as the current unit cannot take much more. The owner hopes to get it done next year, but there is a massive obstacle in the way.

As user Boosted200 noted on YouTube, they have been diagnosed with lung cancer, which means the project might not reach that stage. Regardless, the owner hopes that the video will be a memory that is treasured by his children. 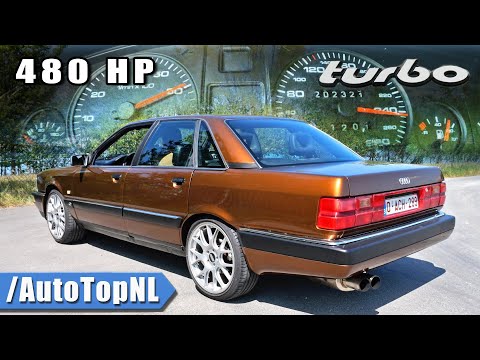