1 For This BMW E30, Beauty Lies Under Dirt and Grime, Watch It Shine Like New Again

3 Professional Detailer Reveals How Much He Makes in a Day, It May Surprise You

In the four years when Ferrari built the 328 GTB and GTS, the Italian marque only assembled 7,412 units of its V8-engined sports car. The model was replaced by the 348 in 1989, but the 328 is still appreciated today both for its design and its power bump over the 308 and the ability of easier maintenance on it. This particular example has not been cleaned in six years, and it shows.
8 photos

Larry Kosilla of AMMO NYC went to the rescue again, as he was called by a friend to take care of a Ferrari that needed to be saved from a barn full of landscaping supplies. Its owner was there to hand over the keys, as well as tell the story of how he got the car. While it isn't clear why the owner left it to sit for that much time, Larry is cleaning it regardless.

As you will observe, the Gran Turismo Spider, as that is what GTS means in the case of the 328, has mold in its interior, and this is not the worst part. Its clear coat has been damaged by debris, and the paint needs serious work. Once you observe the damage, you begin to wonder if Larry will manage to make it shine.

Well, we have faith in his skills, as well as in his products, so we are going to let him do his thing. The good news is that the owner will get to see it finished, and this is just the first of many other disaster details planned by Larry.

Each of those details involves a vehicle that has been forgotten in a barn or someplace inappropriate to store a vehicle, and it shows. Their current owners may feel overwhelmed by the level of care that the vehicles require, and potential buyers are not going to have the courage to get a car that is this dirty.

Larry plans to show the cleaned vehicles to their owners, and the ball will be in their court from that moment on. They will be able to choose whether to sell their cars as soon as possible, since they have just been cleaned, or they have the option to get them serviced and driving. Either way, no more storage time for these vehicles, as you can see the damage that time can bring. 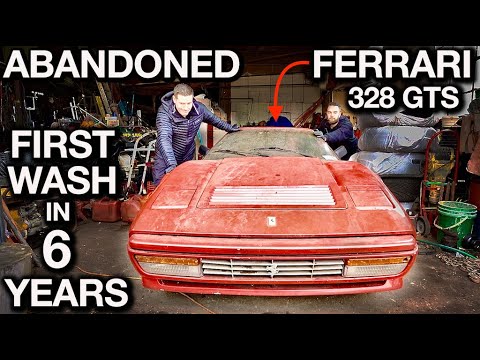