1 1967 Pontiac Firebird Survives All Alone in a Barn, Now You Be the Hero

5 Burt Reynolds’ Smokey and the Bandit 1977 Pontiac Trans Am Sold for Nearly $500K
Car video reviews:
Up Next

The third generation of the Pontiac Trans Am made its debut in late 1981 for the 1982 model year, and it was a significant improvement in styling and performance over its predecessor. On top of the sleek wedge design and the pop-up headlights, the model also came with a lower weight than the Firebird before it.
9 photos

Although the Pontiac brand was discontinued in 2002, the Firebird model has always had a solid fan base. Both the third generation and the second generation of the model can pride themselves on this fact due to their presence in popular TV shows and movies.

The first and the fourth gen models had their share of appareances, but neither were comparable to what the two mentioned generations of the Firebird have achieved.

The iconic statute probably came from Smokey and the Bandit, where the second-gen Trans Am was Burt Reynolds's sidekick that carved a Firebird shape in the minds of most of the people who had seen the film, but also from Knight Rider, the TV show that made the third-gen Trans Am popular for many of its viewers.

The vehicle in this video has not been moved from its storage place, a garage, since 1995. We are writing about 27 years, but we have seen barn finds that look worse after fewer years spent off the road.

This example was initially a company car for its first owner, whose nephew managed to get in contact with Larry Kosilla of AMMO NYC. The owner was the only person who drove the car while it was being used, and the vehicle still has its original bill of sale, not to mention the original hubcaps, which are incredibly hard to find (and to keep).

Now, before being angry because car prices have gone through the sky this year, as well as in recent years, you should be reminded of the fact that vehicle safety has increased dramatically since 1982, and emissions have been decreased to a similar extent.

This vehicle only comes with 150 horsepower and 239 lb-ft of torque, which is not that impressive from a V8, albeit a carbureted one, but still, a V8.

With the math and history out of the way, time to watch Larry detail this Pontiac and show us that even professionals should be wearing a full face shield when cleaning a vehicle's underside. You will see why in just a couple of minutes after hitting play. 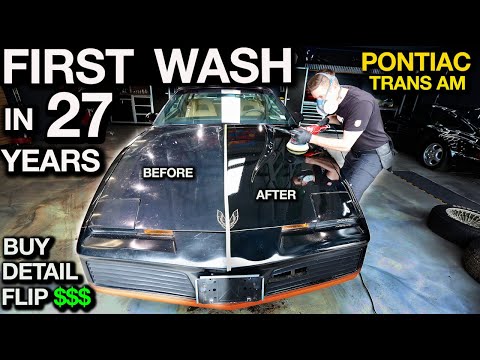