5 The Perfect Breed: Italian Musclecars
Car video reviews:
Up Next

Every once in a while, surfing through car websites, it happens we come across special cars. It doesn’t happen all that often though to find something as rare as the 1982 De Tomaso Pantera GT5 we have here.
46 photos

Born in 1971 in the hands of Ghia designer Tom Tjaarda, the Pantera remains to this day one of the most coveted mid-engine sports cars in the world, and one we all would love to see come back as a worthy competitor to the likes of the Corvette or the 911. Especially if they come back as the GT5 incarnation.

This variant of the Pantera, introduced in 1980, was produced in very limited numbers, so finding one is improbable. Finding one wearing the colors usually seen on a BMW M1 Is virtually impossible.

Or so you would think.

Currently listed on the Classic Cars website is just such a thing: a 1982 De Tomaso Pantera GT5 with a wide body kit and the distinct blue, purple and red stripes on a white body.

According to the people selling the car, it's the only GT5 in existence colored this way. It was allegedly produced as such by De Tomaso factory itself, and apparently there’s even documentation attesting to this fact.

The car was brought in the U.S. in 1983, and spent most of its time changing hands repeatedly between connoisseurs. All took great care of it, as it still is in good condition, and sells without being restored or modified in any way, including the original interior.

The car has been on sale for some time now, and despite its uniqueness, has failed to find a new owner. 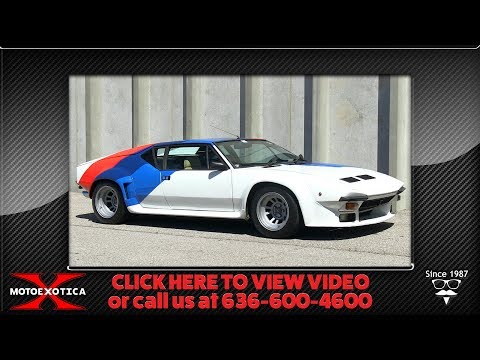