Introduced in the 1930s, the Century received a turbocharged V6 in 1979 with V8-like performance, namely V8s from the Malaise Era of the American automotive industry. Affectionately called Turbo Coupe, this variant can be considered a special edition because GM delivered just around 1,100 examples of the breed during its two-year run.
11 photos

A precursor of the Grand National-based GNX developed in collaboration with ASC/McLaren, the Century Coupe was only available with the Turbo-Hydramatic 350 three-speed automatic transmission. Originally priced at $6,113 or $23,400 adjusted for inflation, the force-fed model is even rarer in this day and age because of the V6’s overheating and detonation issues.

Officially rated at 175 horsepower at 4,000 revolutions per minute and 275 pound-feet (373 Nm) of torque at 2,600 rpm, the Century Coupe is over 400 pounds (181 kilograms) lighter than the 1979 model year Corvette. Fitted with 3.42 gears instead of the standard 3.08 rear differential, the featured vehicle clearly isn’t a strip-slaying machine. The same can be said about its opponent, a 1973 model year Buick Century GS with the four-barrel carburetor.

A two-barrel carburetor was standard, but for merely $45 at the time, the upgraded carburetor was worth every dollar. The 350-cubic-inch V8 in this configuration is much obliged to crank out 195 horsepower at 4,000 revolutions per minute and a stout 290 pound-feet (393 Nm) at 2,800 rpm.

Also fitted with the TH350 three-speed automatic transmission of the Turbo Coupe, the Gran Sport is rocking with 2.73 gears instead of the standard 3.08:1 ratio. Unlike the newer competitor, the Century GS is a tad heavier at 4,200 pounds (1,906 kilograms) including the driver. By comparison, the Century Turbo Coupe tips the scales at 3,485 pounds (1,581 kilograms).

Care to guess which is the quicker Buick over the quarter mile? Then fast forward to the 4:50 mark of the video to see the small-block V8 car taking the win in a slightly pedestrian 16.42 seconds at 83.89 mph (135 kph). 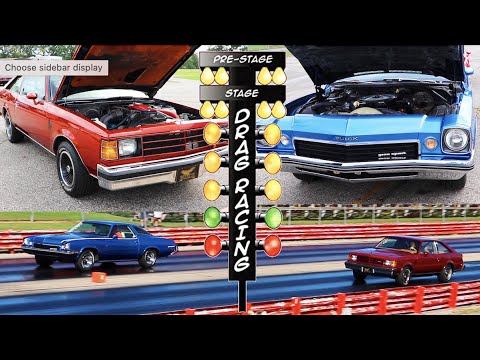