1 This Is the Hottest BMW M Ever Made, Even Though It's Not the Fastest

2 Paul Rosche Was the Heart and Soul of M Division, Time to Put Respect on the Name

3 BMW M1 – The Forgotten Sports Car Icon That Made History

This month BMW M is celebrating 50 years of existence. That's half a century since a rather modest debut, with a total of 35 employees. Half a century in which M became "the most powerful letter in the world," and for good reason. Currently, almost 10 times as many employees are working for BMW Motorsport GMBH, and the line-up of performance vehicles they deliver is astonishing.

Of course, every story has a beginning. And the first-ever M-badged car was the BMW M1. This was also the first mid-engined BMW to be mass-produced. Between 1978 to 1981, a total of 453 units were built.

And that explains why you have to pay a considerable amount of money to get your hands on one today. You can expect to pay as much as $850,000 for a pristine example on the German market these days. But if you're lucky, you might get away with just over $600,000.

The BMW M1 is a rare bird, to say the least. Just think about it, when was the last time you saw one driving past on a public road? Giorgetto Giugiaro was tasked with designing the car, but a group of former Lamborghini engineers also contributed to the project.

But the road-going version of the M1 is still far more common than its race-spec sibling. Reportedly, the M1 Procar accounts for only about 10% of all M1s ever built. The head of BMW Motorsport at the time, Jochen Neerspach, created the BMW M1 Procar Championship in 1979.

This one-make series would be the proving ground for the BMW M1 Procar and, at the same time, a support series for Formula 1 events that were held in Europe. The marketing skills of the people who managed the series were on point.

The list of drivers that were invited to compete in the M1 Procar Championship is beyond impressive. It includes people like: Mario Andretti, James Hunt, Niki Lauda, Emerson Fittipaldi and Clay Regazzoni. Even former Fifth Gear host Tiff Needell was invited to race.

So there's no doubt that the M1 Procar units have a strong motorsport legacy to support their name. These are not easily-available cars. But one is now being auctioned off in the United Kingdom by a seller called Henderson Fellowes.

They only deal with highly-sought-after vehicles, and their already-sold inventory includes the likes of Ferrari F40, 1966 Ford GT40, 1963 Ferrari 250 GT/L Lusso, and a 1960 Aston Martin DB4 GT, to name just a few. They are currently offering a 1979 BMW M1 Procar that has a lot of stories to tell.

This particular vehicle was one out of four Procars to be built by Osella Squadra Corse and one of two vehicles to be delivered to the BMW Italia team. With Elio de Angelis behind the wheel, this very car won the inaugural round of the 1979 Procar Championship at Zolder!

In 1980 the car founded its way to the USA, where it was registered to compete in the IMSA GT championship for what would later become team Red Lobster Racing. It was a difficult first season, but registering for the GTO class in 1981 brought on the wind of change.

You could say that this chassis is legendary just by looking at its 1981 results: it won 12 out of 16 races! Following that moment, the car was sold to Diego Montoya. Yes, he is related to Juan Pablo Montoya. The famous F1 driver is Diego's nephew!

The car returned to Europe in the late 80s, where it came under Swiss, Spanish, and later Belgian ownership. After more than two decades of service, restoration was completed in 2005 and 2006, and the car continued to race on circuits around Europe.

It found its way into the service of ex-F1 driver Gerhard Berger. After almost 40 years, chassis 4301040 was back home. With Berger as its owner, service and preparation were carried out at the BMW Motorsport factory in Munich.

In 2019 the M1 Procar relocated to the UK, and two years later, it even made an appearance at the Goodwood Festival of Speed. A video of it at the event is included below.

Right now, the car can be seen in London, but you'll have to give Henderson Fellowes a call to find what the retail price on it is. Given all of its history, you might be looking at a 7-figure price tag here! 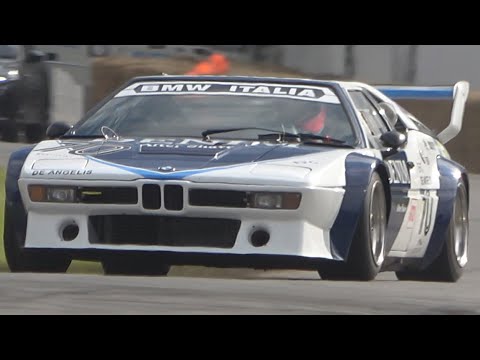