3 2007 Chevy Short Bus Gets Converted Into a Spacious, Stylish, Off-Grid House on Wheels

4 Kulba's Woody Is a Wooden, Handcrafted Retro Teardrop Camper With a Sweet Price

Skoolie conversions are cool and this one is no exception, despite the fact that it no longer moves under its own power. The Sooke Ski Bus could probably teach all the other skoolie conversions a thing or two about style and practicality.

The Sooke Ski Bus is named this way because it’s located in Sooke Basin on Vancouver Island, British Columbia, and because of the retired scroll sign it came with when Dan, the owner, bought it. It started out as a 1975 Motor Coach International Crusader bus first used in North Dakota and then Canada, and is now a tiny home that no longer moves under its own power. It makes up for what it lacks in mobility with plenty of style.

The Sooke Ski Bus lives permanently close to the beach in Sooke Basin, and is an excellent example of upcycling, as the video at the bottom of the page also highlights. It still has the wheels and the engine that once helped it get people to their destinations, but it no longer uses either. Instead, it maxes out on charm and practicality – and killer views of the ocean.

Truth be told, most DIY tiny houses or conversion projects showcase loads of good taste and building skill, so it’s not like the Ski Bus is in not in select company as is. Still, to see an old passenger bus turned into such a cozy little home is refreshing: the cutest bus home ever, Dan says. It's all the more refreshing if you take into account the fact that it only took six weeks for the project to be finalized.

Dan chose to keep certain things from the bus that showed its former use, like the driver cabin in the front (including the steering wheel and dashboard), the plaque with the specification, and instructions on how to open the emergency windows. Speaking of which, they’re all in place still, which offers incredible amounts of natural light even though the windows on one side have been covered in frosted glass for privacy purposes.

Right behind the driver’s seat is the lounge, which can serve as an additional bedroom for two people, since the futon expands. Right next to it is a pellet stove with real brick surrounding, which is used for warmth and, you know, mood-setting. On the other side is a nook with a floating table that serves as dinette or working space. The kitchen is farther back and is built to tiny house standards, but elegantly, with resin-covered countertops adding a dash of flashiness. It still packs a double sink, a tiny oven and an equally small fridge, a dual-burner cooker, and plenty of storage.

The bathroom is actually a half-bath, but stands out for how it’s able to cover the basics while still looking cool – and not cramped, which is more important. There’s a standing tiled shower with recessed storage and tall sides to the tub to avoid splashes, and a toilet with a sink. Just recently, to celebrate Earth Day, Dan integrated the sink into the tank of the toilet, so that you can flush later the water you used to wash your hands with. “Every drop counts,” Dan says on social media.

The bedroom is all the way at the back and fits a queen-size bed with room to move around it, storage underneath the bed, a TV, and wraparound blackout curtains.

The Ski Bus is nearly 40 feet (12.2 meters) long, 8 feet (2.4 meters) wide, and has 6.5 feet (2 meters) of headroom. It’s partially clad in cedar paneling, which adds to the homey feel of the place, and it’s furnished sparsely on purpose, to make the most of the available space.

Since it no longer moves, Ski Bus has a wooden deck outside, which holds a giant barbecue, and a shaded lounge area, where several people can sit down for dinner and drinks. Neither of the videos below offer an idea as to how much the 6-week conversion cost, but for what it’s worth, Dan owns the piece of land it sits on. So, while this bus home is (probably) difficult to replicate, it can still serve as inspiration for whatever downsizing future project you might have. 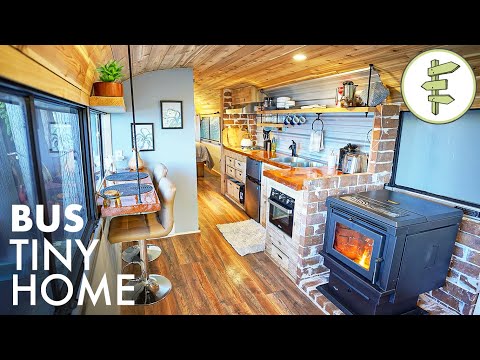