Aurel Niculescu
Now that heat is upon us, and never minding flash summer floods, there is probably never a better time to start indulging your Corvette Convertible fantasies. If you also need to include a C3 in the mix, we might have found the right companion for you.
24 photos

Standing as the epitome of “it's not too late to have a Corvette summer!” is this orange-over-black unit proudly residing in the inventory of Grand Rapids, Michigan-based Garage Kept Motors. There, it flaunts the long-standing (1968 to 1982) C3 Stingray traits, as it was “regarded as one of the best-looking American cars to come out of the muscle car era,” according to the dealership description.

Well, there may have been other cool muscle cars during the age that could trigger the right feeling of euphoria endorphins, but we still agree that somehow Chevrolet’s Corvette “was (always) more than the sum of its parts.” The C3, based on the bonkers Larry Shinoda Mako 2 concept car, would even have some of the biggest and meanest engines that General Motors ever built… though that may not necessarily be the case here.

Instead, this Corvette probably liked to keep it both fun and simple with the factory L82 350ci V8 engine that churned out 370 horsepower when rated as the “Turbo-Fire.” Once under the hood, do also take a look at the original “Frigidaire” air conditioning and then think of all the summer road trips that could be spiced with the “true dual exhaust” and the factory stick shift, a four-speed manual transmission affair.

And those are just some of the mechanical highlights. Visually, the C3 attracts everyone’s attention with help from the Metallic Orange paintjob, as well as the contrasting black soft top (allegedly newly replaced) or the black with woodgrain details interior. Plus, it seems this Convertible is not going to break the bank… too much, given the asking price of exactly $33,900! 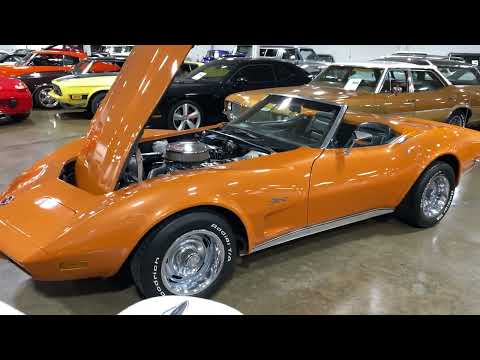