Vlad Mitrache
If there's any chance for muscle car lovers to warm up to the idea of electric vehicles, it might be through something like this 1972 Plymouth Satellite converted into a battery-powered restomod.
9 photos

That's one way of looking at it. The positive one, you could say. The other suggests you should do your best to keep this away from the eyes of any muscle car fanatic as they might try to burn down such a sacrilegious abomination. "A classic piece of Mopar history tainted with the modern powertrain of a Tesla Model S? Hell, you might as well stick a Ford badge on it, who even cares anymore?"

Regardless of how any of us feel about these conversions, I feel like any restomod should only be judged through the lens of its owner. And, in this case, Kevin Erickson, the man behind the project, couldn't be happier about how his eighteen-month work came out. "It's the family car," he says in the video. "It goes to school, Home Depot - it goes everywhere. It makes me keep finding excuses to go places." Driving for the sake of it? If that's not the sign of a good build, I don't know what is.

And since it borrows the entrails of a Tesla Model S, it also goes reasonably fast (I only say "reasonably" because of how much our sensation of performance has been warped by the Plaid). Erik says it pulls very consistent 12 second runs at the drag strip – proof in the video, if you need any – with a trap speed of 107 mph (172 km/h).

You can actually see it race a Model S (I almost wrote "another" Model S) so you can get a very clear idea of the difference in performance (though this was very much a recreational pass, hence the extra person in the car). Obviously, despite being lighter than the Tesla, it's going to suffer on the aerodynamics side of things despite the Satellite's "fuselage styling".

However, don't let the fixation on acceleration and quarter mile times recently exacerbated by Tesla grab all the attention. This thing should be seen as yet another proof that giving a classic car an all-electric powertrain doesn't really kill its soul, but rather extend its life. The people who see it as the former are just the ones who can't accept the simple fact that not everyone thinks the same way they do and that there are more ways in which you can show your love for something – in this case, muscle cars. 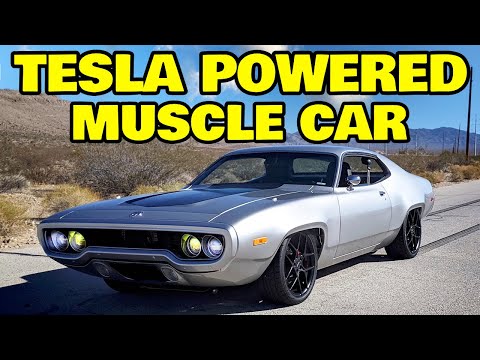