1 Retro Japanese Monsters Brought to the U.S. by JDM Legends 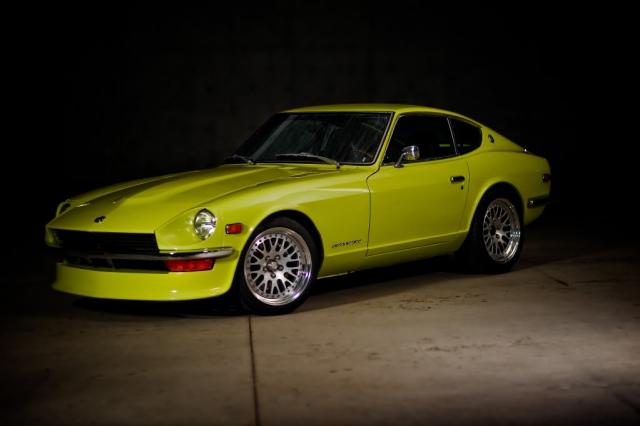 We recently came across what instantly made us feel we are looking at the greatest Z-car ever, a custom build that leaves you mouth-opened the first time you see it: a bespoke 1972 Datsun 240Z that has been extensively tweaked, which is currently up for grabs on eBay. As a fresh reminder, the Datsun 240Z is the name of the Nissan S30 in some markets outside Japan and represents the first generation of the Z GT 2-seat coupe.

But getting back to this amazing creation by Jared Cullop, who has so far owned no less than 14 Datsun 240Zs, this is the result of a three-year work process, during which the vehicle received an eye-catching Lime Green paint, revised engine, drivetrain, suspension and brakes.

Aside from the extensive body work and lime green paint, other impressive changes brought to the vehicle are the wheels: the 17" CCW Classics with brushed centers suit the Z perfectly and feature polished lips, fitted with 235/40-17 Michelin Pilot Sport 2 tires to give the Z loads of grip.

Powering the car is a 2002 Silvia SR20 engine built by National Speed or, in other words, a 2.0-liter turbocharged Nissan four with more than 350 horsepower.

“It all started when, after owning 13 other Z cars, I decided to dedicate every dollar necessary to creating the best Z on the planet. Now, we all have our opinions on this, but this one has been developed with honor to the Z, changing nothing at all (other than cleaning up the bumpers) that wasn't necessary to improve performance,” Cullop says.

So after all this hard work and amazing result, why could Cullop even think to sell this car? We’ll let him answer that question himself: “Because I built this car while I had my Porsche track car. But the Z build got so expensive (and I refused to cut corners) that I had to sell my Porsche to complete it. Now, I have it for sale so that I can get a real track car. Yes, the Z would be AMAZING on the track, but if I ever hurt it, it would kill me. I want something that I have no attachment to that I can flog on my quest to perfect laps.”

The bid at the time of writing is at $59,000, with less than two days left before it ends. You can check out the status here.