Looking exactly as if a cowboy decided to make Chevy cars seem better prepared for Texas, the legacy of the El Camino nameplate does not need too much introduction. It only needs a little bit of SS swagger.
31 photos

Rocking an original Maroon paintjob and SS white stripes, this 1972 example of the third generation El Camino has a 350ci V8 engine under the hood and a handful of subtle, tasty upgrades going for itself. Tucked proudly inside the massive inventory of Sherman, Texas-based PC Classic Cars, we are dealing here with a Chevy that is neither too flashy to stand out in the wrong crowd nor humble enough to allow anyone to forget its iconic status.

On the outside, the classic car dealership promises a “solid body with (a) nice Maroon paintjob,” which is said to be the original color – though it has been repainted since and now shines pristine. There is also a cowl hood with white SS stripes, along with 15-inch SS-style wheels shod in raised, white-letter Cooper Cobra tires, just to attest to the vintage atmosphere.

Moving inside we could find a factory black interior, which is neither too fancy nor distractingly cheap. The atmosphere is complemented by a center console, bucket seats, an SS dash plus gauges, as well as an 89,456 miles/143,965 km odometer readout. Unfortunately, the latter is of the pesky “actual mileage cannot be verified” kind. Alas, there are also other highlights to speak of.

For example, there is a “blows cool, not cold” factory A/C along with a “strong running” 350ci V8 engine mated to a Turbo 350 three-speed automatic transmission. Other miscellaneous details are probably even more noteworthy, such as the Flowmaster mufflers, or the powered steering and front disc brakes.

All in all, not an awfully bad package, and this El Camino might enjoy a few summer road trips before needing additional work to be done or kicking off an entire restomod project. Sure, everything boils down to the asking price, which is advertised by the classic car dealership at exactly $35,500. 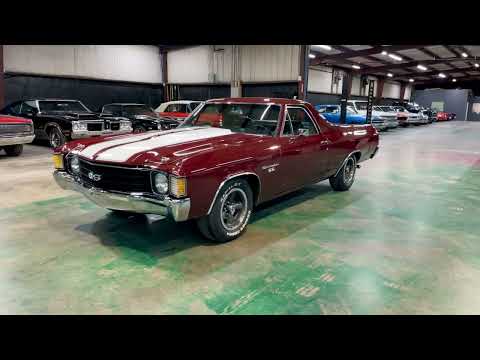