Fans of vintage automobiles, particularly enthusiasts of Blue Oval muscle from the 1970s, need to check this out. After all, what we have here is a classic Torino GT sending everyone back to quarter-mile school...
23 photos

True connoisseurs will easily understand why the owner of the old school ride chose the Torino nameplate. Ford’s intermediate for the North American market between 1968 and 1976 has a successful racing heritage, both with NASCAR and other forms of motorsport.

The Blue Oval was smart enough to give Torino customers access to muscle car power among the many variants. For 1971 alone, there were 14 versions, including the 429ci Cobra Jets or the sporty high-end trim Torino GTs. An example of the latter is also the focus of an interesting video (embedded below) from the Drag Racing and Car Stuff channel on YouTube.

Traditionally, the videographer is not in the habit of showcasing classic vehicles in starring roles. But when he does, it is clearly a treat. A big one, quite literally, when thinking about the size of this white 1971 Ford Torino GT. By the way, its owner seems to understand that it also needs a modern trick up the sleeve to properly compete with newer drag foes.

As such, the Torino GT gets a healthy dose of nitrous for each race. And it’s almost incredible how much the times improve once the driver gets better control of the monster. For starters, the initial run against a turbocharged Chevy Silverado isn’t that impressive. It does win, but it’s not something to write home about (10.52s vs 12.45s ETs).

From the 0:44 mark onwards, though, each battle represents another step up the chain of command ladder. The second skirmish entangles the Blue Oval with a crimson and black Pontiac G8, and after putting on a sideways show during the burnout stage... the Torino GT gets down to business with a narrow 9.62s versus 9.7s victory.

Things only get better from now on, with the Torino GT also eating up a GT500 for dinner. It was another close call, though, as the ETs showed a minuscule advantage for the old-school racer: 9.29s versus 9.32s. Last but not least, another feisty GM representative came to the late-night party. Still, the CTS-V had no chance (9.33s vs. 9.87s), and the Torino sent everyone back to racing school that day. Satisfying, to say the least. 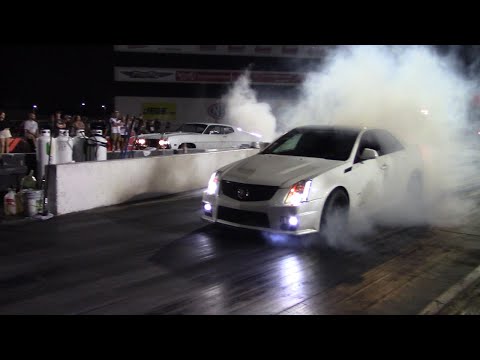