2 Dodge Charger SXT Turns Into an SRT With Aftermarket Bumpers, Side Skirts, Hood

4 1970 Dodge Charger Was Supposed to Become a Restomod, It Didn't

Even though it's collectible on its own, the 1970 Dodge Charger is also perfect for restomodding. Carbon-fiber body kits from SpeedKore come to mind, but on this occasion, we’re dealing with a pro-touring build with a pretty special motor in the guise of an Indy 426 HEMI crate engine.

The 7.0-liter V8 is topped off with Hilborn fuel injection and velocity stacks, and shifting is the duty of a five-speed TKO that spins a Dana 60 rear axle with 3.54 gears. Wilwood calipers and rotors provide stopping power, and the Foose five-spoke wheels are wrapped in Nitto 555 tires.

A high-performance compound designed mostly for dry handling, the 555 series is rocking twin center ribs for increased traction and stability, four circumferential grooves for water evacuation, a tapered inner block for less deformation during cornering, and large tread blocks for enhanced traction. A-arm suspension, QA1 coilovers up front, and a detailed undercarriage also need to be highlighted, along with the stainless exhaust.

Chassis number XS2900G232118 started life as an R/T trim level, and the R/T emblem is still featured on the driver-side headlight grille despite the engine swap. As a brief refresher, Dodge offered a 440-cu in (7.2-liter) V8 as standard, the 440 Six Pack, and the 426 HEMI as the range-topping option.

Currently showing 1,412 miles (2,272 kilometers) on the clock, the blacked-out muscle car with Charcoal Grey tail stripes features a pistol-grip shifter, leather for the bucket seats, air conditioning, and the bone-stock wood grain for the interior trim. The audio system isn’t original, though, but an Alpine head unit with Bluetooth phone connectivity, AM, FM, and a CD player.

Offered by The Vault in Jackson, Mississippi, the vehicle was restomodded over six years according to the selling vendor. Given the amount of work that went into this one-of-a-kind build, the $185,000 asking price shouldn’t surprise you. After all, the Indy crate engine alone costs $19,995, excluding upgrades such as velocity stacks and fuel injection. 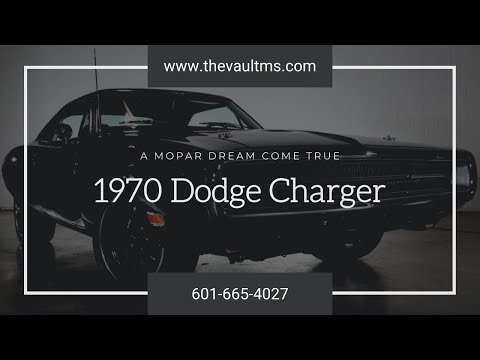