3 For This BMW E30, Beauty Lies Under Dirt and Grime, Watch It Shine Like New Again

4 It Takes Work to Make a 993 Carrera S Look This Clean, but It Is Worth It

5 2008 Jeep Wrangler Gets First Wash After Five Years, It's a Disaster Detail
Car video reviews:
Up Next

Purchased in Long Island way back in 1970, the 510 in the featured clip was driven for seven years, then parked in a garage from 1977 to 2016 when a gentleman by the name of Derek Matcheski purchased it. Given the visual condition of this blast from the past, Derek asked AMMO NYC if they can spruce things up. Of course, Larry Kosilla and his crew said yes.
36 photos

After so many decades locked in a garage and a few years of slumber in a barn, the 510 is dirtier than insert-name-here’s browser history. The cabin is covered in mold on the doors, seats, and headrests. The floors are full of dirt, mouse droppings, and spare parts in the passenger-side footwell. As far as the outside is concerned, the dust has caked in every seam, cute animal prints are present on the front and rear windows and the tires have seen better days.

The peeps at AMMO NYC started this project by power washing the blue-painted car. After soaking up the car with foam, Larry and company started brushing away. Seeing the window seams release this many decades of grime is, dare I say it, satisfying. Next up, the detailing begins in earnest.

Still wearing the original paint, this little Datsun received a lot of cutting compound to restore the single-stage paintwork. AMMO NYC used wool pads because they don’t clog up with residue as fast as microfiber does. Wool pads also leave a wax-ready finish. With that job done, the hubcaps and every other metallic trim were treated to a lot of scrubbing and polishing.

The interior detailing begins with the removal of various items, including a parking receipt from 1977. While cleaning the mold off, Larry discovered that some of the original factory plastic was still on the door cards. On the subject of doors, a wasp hive was hiding on the driver’s door jamb.

After some floor vacuuming and window scrubbing, Larry applied a ceramic topper designed to add up to three months of clear coat protection. Obviously enough, the owner was rightfully stunned by the end result. 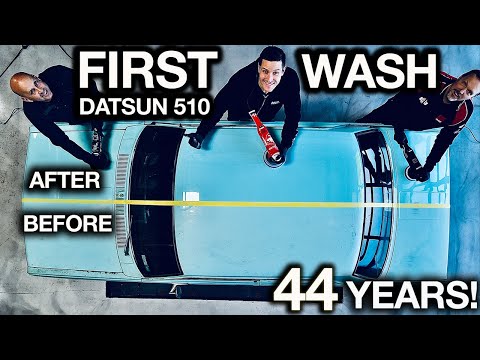