Just three generations and sales between the 1964 and 1977 model years were enough to establish a huge cult following for GM’s Chevrolet Chevelle. It had numerous iconic variants, but probably none were cooler than Super Sports.
38 photos

Imagine the golden era of feisty muscle cars and it will probably not take long before understanding why GM derived the Chevelle in so many ways. Not just as coupes, sedans, convertibles, or station wagons but also as A-body siblings like the El Camino, Monte Carlo, Beaumont, or Malibu.

However, diehard fans know very well there is one Chevy Chevelle that would reign supreme, and it bore the short “SS” moniker. Super Sport was not just a package, it was Chevrolet’s entry point into the raging muscle car battle of the era and the company naturally upgraded the series as it went along.

Back in 1970, the second-generation Chevelle SS needed some additional big-block Chevy V8 oomph to go along with the SS 396 version. Thus, the company made way for the mighty SS 454ci (7.4-liter) engine that would churn out up to 450 horsepower when ordered with the optional LS6 version that brought a single 4-barrel 800 CFM Holley carburetor at the muscle car party.

However, there is a big catch with this feisty, expensive, and great-looking 1970 Chevrolet Chevelle SS 454. The Cranberry Red (with black stripes and black vinyl top) over black bucket seat interior example is a cowl induction-equipped base LS5 version. That means it can “only” promise a total of 360 horsepower, which is just ten ponies over the same model year SS 396 Turbo-Jet V8.

Alas, because it is looking all pristine and proud in the inventory of Grand Rapids, Michigan-based Garage Kept Motors, that might not matter that much to core enthusiasts of the series. This is because of the numbers-matching promises made in the short description, and there is a trio of them for the 454ci, M22 four-speed manual transmission, as well as the 12-bolt Posi rear end. 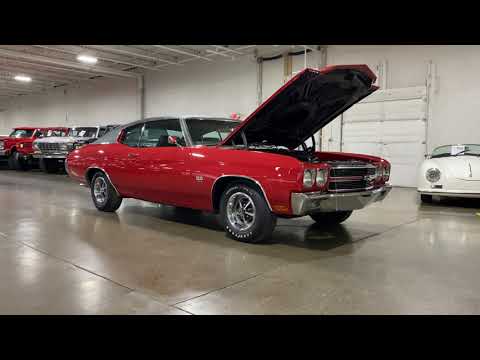