3 Pristine 1988 Chevy Monte Carlo SS Has Everything Original, Including 1,625 Miles

Chevrolet’s sixth-generation Camaro is currently in a world of (sales) hurt right now. Because of its natural competition, but also due to C8 mid-engine woes. Alas, that should not be of any concern to classic examples.
36 photos

Back in 1970, the Chevrolet Camaro was entering its second generation. And it was fighting rivals such as Ford’s Mustang or Dodge’s Charger/Challenger right beside platform sibling Pontiac Firebird. Now the latter is extinct, and according to the rumor mill even the Camaro has its days numbered in the current coupe form.

So, any vintage example that can be found and driven is a collectible in the making. Even when properly modified. So, those classic car purists would immediately scream restomod outrage. Like this Daytona Yellow 1970 Chevy Camaro Z/28. One that looks shiny and bright due to a repainted original color scheme. It still resides quite proud on 18-inch American Racing Torq Thrust D wheels splashed with chrome and gray.

And does so in the inventory of Sherman, Texas-based PC Classic Cars, complete with a Black vinyl top. That paintjob and color scheme will surely give out ample sunflower field vibes once Lady Winter decides to make way for its sisters Spring and Summer. The code 51 Daytona Yellow, black top, and chrome trim make up for the exterior highlights.

Inside, there is a black, factory-style cockpit with bucket seats and a center console. As well as a few modern creature comforts. Such as the leather-wrapped Lokar Lecarra steering wheel, or the Dakota Digital instrument cluster. As well as the “cold” Vintage Air A/C. But wait, there is more contemporary stuff going on under the metal.

Below the hood resides a 350ci V8 engine packing Edelbrock intake and carburetor that is hooked to a 700R4 automatic transmission (with overdrive). Other highlights include the power steering and Wilwood power brakes. Along with the RideTech StrongArm control arms, RideTech four-link rear suspension, and coil-over shocks. Or the ceramic-coated headers with Holley Flowmaster mufflers.

That is one ride that is going to impress when canyon carving. If one can absorb the shock of paying $45,500... 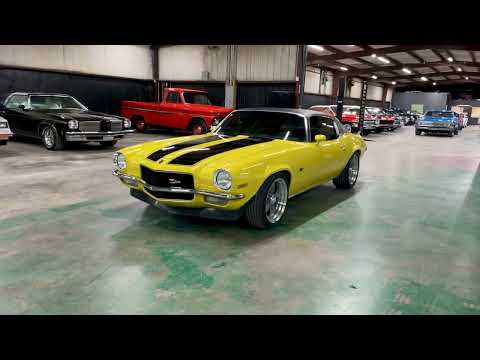