1 Crighton Reveals New MotoGP Like CR700W, Rotaries Are Back!

5 Mazda Still Working on a New Rotary, It Might Run on Hydrogen
Car video reviews:
Up Next

1969 VW Beetle Is a Distant RX-7 Relative, Should Not Be Underestimated

As you might have noticed, we're running a Tuning Month special here on autoevolution. People will approach the process of modifying a vehicle in various ways, according to their experience, vision, and budget. While visual upgrades are still cool, there's nothing quite like a car or bike that has had every single part upgraded on it.
14 photos

Some people will say that tuning is all about being flashy, but let's not forget the concept of a sleeper car. And sleeper cars go hand in hand with the idea that you should never underestimate your opponent. You might be tempted to think that a 50-year old Volkswagen Beetle is no threat to your Ecoboost Mustang or your almost new BMW 230i. And at first glance, this yellow Bug does seem somewhat harmless.

The seller has had this vehicle since 2018. He mentions that at the time, the project was still a work in progress. We've come across a 2013 video of what seems to be the same car, depicting what it was like back then. The yellow finish on the car is Porsche reminiscent, and for a good reason! For a more aggressive look and increased stability, wider front and rear fenders have been mounted.

You'll probably also notice the discrepancy in size between the front and rear wheels, which come in 15" and 17", respectively. This car now has four-wheel disc brakes and an upgraded suspension, and the mystery only deepens if you will open the door. There are color-matching bucket-seats inside and there's also a roll cage. I must admit that I've never seen someone install a roll cage in a car for display purposes alone.

That means that the biggest mystery about this vehicle has yet to be unraveled. You get a better understanding of how raw this project car is by noticing that there's no heater, defroster, or radio on the inside. This isn't the best part about the build, but since its completion, this Beetle has only been driven for 500 miles (804 km)! If you had no clue that Beetles are related to 911s, then you'll be surprised by popping the hood of the car.

And that's because there's no engine in there. Instead, you'll notice a custom aluminum radiator with dual electric fans. With such efficient cooling in place, there can be no doubt that the engine this old VW is harboring is something special indeed. This is where the RX-7 connection comes in. Whatever feeble engine used to power this little car has been replaced by a carbureted 13B twin-rotor unit.

This rotary engine seems to be a hybrid assembly made up of first-generation and second-generation RX-7 parts. A $3,920 invoice containing all the details on the work done by Kurt Robertson Enterprises is provided with the car, and the seller states that it should be good for about 300 horsepower! Power is sent to the rear wheels via a four-speed manual gearbox that originated from a Volkswagen Bus.

Some users have pointed out that the horsepower ratings may be a bit optimistic and that it's more likely that this is a 200-horsepower vehicle. Considering a standard Beetle from that time weighs in at around 1,735 lbs (786 kg), this should still be quite exciting to drive! Even with all these upgrades, there seems to be little interest revolving around the project, as the highest bid stands at just $5,000, with one day to go before the auction is over. 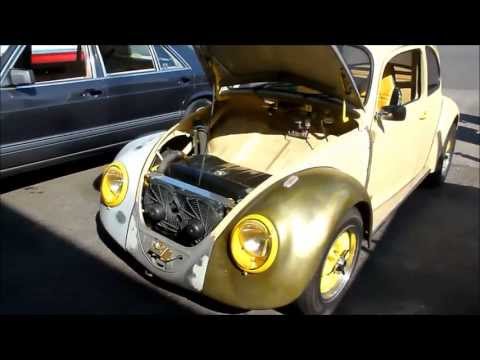