Introduced in 1969, the Tans Am was officially a performance and appearance package that transformed the regular Firebird into bonified tire-shredder. Almost 700 examples were built during that year and out of those, only eight were convertibles.

Nearly six decades ago, Ford would dramatically alter the course of the automotive industry with the release of the Mustang. With a beautiful compact design, a wide range of options, and an attractive price, the new model became a sales sensation. In just a year and a half, over 600,000 units left Ford dealerships, shattering all previous sales records.

Detroit rivals General Motors initially thought that the Chevrolet Corvair would prove to be a worthy challenger for the ‘Stang but that never happened, so by the spring of 1965 executives frantically greenlight the development of an all-new pony car platform.

Under the project name Panther, the F-body chassis was initially developed by the Chevrolet division for the new model dubbed Camaro, which would debut in the fall of 1966. As work was progressing, GM got word that Ford was preparing to launch an upscale version of the Mustang under the Mercury brand and Chrysler was thinking about taking a similar approach. As a consequence, Pontiac was given the task to develop a second F-body model.

Dubbed Firebird, a moniker used by a series of futuristic GM turbine-powered prototypes from the 1950s, the car shared not just the chassis, but also the upper body design with the Camaro. However, below the beltline, chief designers, Jack Humbert and William L. Porter went for a different styling for the Firebird. More curvaceous, the Pontiac had an integrated front bumper, a big chrome grille, same-size twin headlights, and subtle twin slit taillights similar to those of the GTO.

Arguably more refined than its Chevy sibling, the Firebird hit the streets in 1967 as either a coupe or convertible. There were five trims to choose from, each one defined by a different engine.

Despite its design and wide range of options, the new Pontiac model sold marginally well. Over 82,500 cars left the factory gates in 1967 but that figure paled in comparison to the Mustang’s 472,121 units or the Cougar’s 150,893.

In order to become more competitive, the Firebird got a mild refresh in 1968. Apart from minor exterior upgrades, the engines became a bit more powerful. This helped close the sales gap with the Cougar, but the Mustang still outsold it by a large margin.

Things got more interesting in 1969 when Pontiac’s pony car was revamped yet again. Exterior improvements were more drastic this time, especially at the front, yet the most exciting news was the introduction of the Trans Am at that year’s Chicago Auto Show. Named after the famous race series and officially called the WS4 Trans Am Performance and Appearance Package, it added a host of high-performance goodies to the range-topping Firebird 400. The exterior add-ons included a bespoke hood with dual scoops, a front spoiler, and blacked-out grille vents, functional air scoops behind the front wheel arches, a wide rear spoiler fitted atop the trunk and a special Cameo Ivory paint with Tyrol Blue stripes.

Inside, the Trans Am got bucket seats wrapped in Morrokide upholstery, as well as a unique steering wheel. There was also an additional option that added woodgrain trims, knit seat covers, a passenger grip, or armrests.

The most breathtaking addition was found under the hood in the shape of an L74 400-ci (6.6-liter) Ram Air (often called Ram Air III) version of the standard 400 V8. With a 10.75:1 compression ratio, a Quadrajet-style four-barrel carb, a beefed-up cam, and cast-iron manifolds, it was rated at 335 hp on paper, but in reality, it was vastly more powerful. A Ram Air IV package with an even more aggressive cam profile and an aluminum intake manifold was also available for those who craved more horses – ten of them, according to Pontiac.

Because it was a late model year addition and it added over $1,000 ($7,964 today) to the Firebird 400’s base price, the first Trans Am was produced in 697 examples. The vast majority of those were hardtops but eight were ordered as convertibles.

Available with a power or manual top made out of either white or blue vinyl, the convertibles were all built at the Norwood, Ohio assembly plant near Cincinnati. Those who wanted to experience the thrill of driving the Trans Am with the top down had to pay even more for the privilege, pushing the price of a well-equipped model over the $4,000 mark. The equivalent of $31,857 today, it was a high price to pay for a convertible pony car back in 1969, which explains why only eight enthusiasts ordered one.

According to GM records, four of them left the factory with manual gearboxes while the other four featured automatics. Fortunately, all eight survived and since they’re the rarest F-body models in existence, the value for one exceeds $1,000,000. The last time one went under the hammer in 2016 at a Mecum auction, it fetched no less than $,1,500.000. The example in question, which can be admired in the gallery, was the first convertible ever assembled. It came with a white top, a four-speed manual, and received a thorough, concurs-level restoration.

While not as sought-after as the ’70-’71 HEMI ‘Cuda convertible, the ‘69 Trans Am convertible is a rarer open-top muscle car from the golden era that many enthusiasts seem to have forgotten about.

Since it’s summer and there’s no better feeling than driving with the top down during this time of the year, imagine how cool it would be to do so in one of these eight beasts. If you need more inspiration, we recommend watching the video below by MuscleCarOfTheWeek. 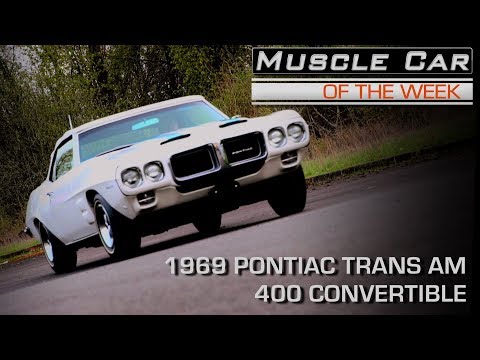