2 Chevy Camaro Gets an Unofficial Facelift, See Anything Funny?

5 What If... GM Smacked Tesla Around With a Real-Life Corvette C8 Electric Sedan?
Car video reviews:
Up Next

1969 Mercury Cougar Is a Crazy Widebody Eliminator Concept, Even if Only Digitally

The second longest-lasting Mercury nameplate was actually the best-selling series and fans have probably already recognized the suspect: a Cougar. Now, we understand if that was not so easy for everyone else, given the virtual looks of this unit.
21 photos

Produced from 1967 to 1997 and then again between 1999 and 2002, there were almost three million Mercury Cougar examples sold over 34 years, making it one of the biggest legends across the entirety of the Ford group. But, of course, muscle car lovers may only have eyes for just one out of a total of eight generations.

That would be the original, 1967 to 1970 Cougars, who lived under “the sign of the cat” like true Eliminators of rivaling muscle cars. Well, at least that is the spirit behind this 1969 Mercury Cougar Eliminator, which is neither original nor fully modern. Instead, it dwells in between, as a “crazy concept” for a widebody incarnation penned by the virtual artist better known as carmstyledesign1 on social media.

After fiddling with vintage stuff like a Lamborghini Countach Rally, a VW Golf ‘R500’ that looked like a wide, slammed Mk1 that could digitally eat supercars for breakfast, lunch, and dinner, as well as an equally-crazy 1,000 horsepower widebody DMC DeLorean that came back from a virtually slammed future, now it is time for something deeply Americana. And this 1969 Mercury Cougar Eliminator concept clearly fits the bill, even if the widebody atmosphere might also cause a ruckus among JDM fans.

And yes, they might have some arguments, like the ultra-deep-dish aftermarket wheel treatment, among others. But, overall, this digital concept car looks exactly like a crazy restomod should – filled with classic styling cues and technically enhanced to the brink of outrageousness. In a word, it is (almost) perfect. However, there is also one major flaw: it is merely wishful thinking, unfortunately! 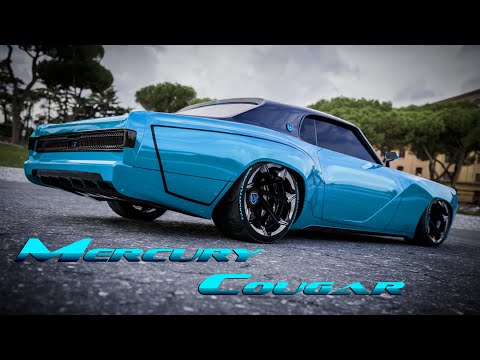