2 A Look Back at the Original Cadillac Eldorado, One of America’s Most Iconic Convertibles

3 One-Owner 1967 Mercury Cougar Spent Years in a Garage, Under a Cover, And in a Barn

Stylish, luxurious, and more than capable of shredding tires, the Cougar XR-7 Cobra Jet 428 was one of the most interesting American-built convertibles on sale in the late-1960s.

The origins of the Cougar date back to the early 1960s when both parent company Ford and the Lincoln-Mercury division were experimenting with new platforms. In mid-1964, the Blue Oval’s Mustang was unleashed on public roads and since it was a massive success, the Cougar project would follow in its footsteps.

Developed around the ‘Stang’s platform, but with a slightly longer wheelbase and a redesigned body, the Cougar was introduced in 1966 as a 1967 model with the aim of bridging the gap between Ford’s wildly popular pony car and the larger Thunderbird. In standard form, it was essentially an upscale version of the Mustang, while the high-end XR-7 trim made it downright luxurious by adding a bunch of high-end features.

Like the chassis, the engine lineup was also carried over from the Mustang, save for the economic six-cylinder that was considered too plebian for the stylish Mercury. This meant that the Cougar could only be had with a V8 under its hood.

For the first two years, the car was only available as a long-hood, short-deck hardtop coupe but more and more potential customers wanted to feel the wind blowing through their hair when driving a Cougar.

Thus, in 1969, the drop-top version became available and in XR-7 guise, it could be equipped with Ford’s massive 428-ci (7.0-liter), Cobra Jet mated to a three-speed automatic. Launched a year earlier as the performance version of the 428 FE, the CJ was not far from a pure race engine, spitting out 335 hp at 5200 rpm and a monstrous 440 lb-ft (600 Nm) of torque at 3400 rpm. However, these figures have been the subject of intense debate for decades, with many arguing that, in reality, it could produce well over 400 hp and Ford was conservative with the ratings to lower insurance costs.

Regardless of the output, this engine and the host of chassis upgrades that came with it made the XR-7 Cougar an atypical, yet extremely cool convertible. It could rival similar luxury models from Europe in terms of design and available creature comforts, but it could also hang with the local big boys in terms of performance.

In 1969, the Cougar underwent its first major revision, which resulted in a more refined exterior design. The straight-lined waistline transitioned toward Coke bottle styling and was now sloped down from the hood line to the rear wheels. Additionally, the front fascia retained the full-width grille with its signature hide-away headlights, but the grilles were now horizontally-slatted, giving the car a more aggressive look. Obviously, the convertibles came with a retractable roof, but unlike the Mustang, it was electronically operated via a dash-mounted switch across all trims.

Unlike the hardtop-exclusive Eliminator, which was distinctively sporty, the 428 CJ-powered XR-7 looked more subdued and upscale. You could call it a factory sleeper since the only exterior feature that hinted at its performance potential was the Ram-Air scooped hood.

The same could be said about the interior, which oozed luxury. The bucket-style seats were upholstered in fine leather, a central console that housed a T-handle shifter was adorned with faux-woodgrain trims, while the dash featured full instrumentation with blacked-out gauges. Apart from power windows and the power-operated roof, the car also came with an electronic tilt-away steering column that swung up and out of the way when the driver's door was opened, the transmission was placed in Park, and the ignition was off.

We don’t know exactly how many XR-7 428 Cobra Jet convertibles were produced in 1969, but we do know that they are rare. Some have survived and were restored by their owners, but they rarely show up at auctions. When one does go under the hammer, it usually demands anywhere between $50,000 and $150,000, depending on the options, mileage, and condition. An example like the white one featured in the gallery, which is part of the Blackhawk Collection, is sure to be worth a six-figure sum.

Half upscale convertible, half thoroughbred muscle car, the 1969 Mercury Cougar XR-7 Cobra Jet 428 is a fascinating drop-top from the American automotive industry’s most exciting era.

In the video below originally posted on YouTube by MuscleCarOfTheWeek, you can learn more about this amazing ride and also hear its massive engine rumbling. 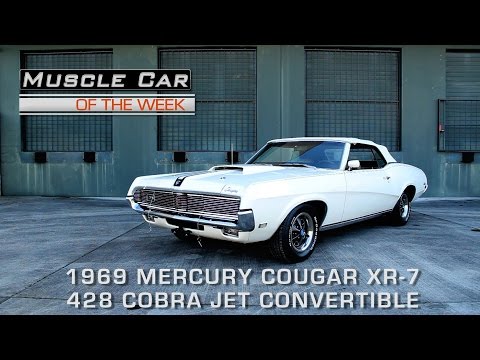