4 Is This the World’s Quickest Stock Shelby GT500 Over a Quarter Mile?

When you hear 426 HEMI, what’s the first old-school muscle car that pops into your mind? If you ask me, that would be a Challenger with the R/T suffix, much like the blue-painted 1970 model in the featured clip.
12 photos

Fitted with a four-on-the-floor tranny and daily-oriented 3.54 rear gears, it’s easy to understand why these Challengers were so desirable back in the day. Their most appealing traits, however, come in the guise of very masculine styling and the motorsport-derived engine that cranks out 425 gross ponies.

Torque is pretty darn healthy as well (490 pound-feet or 664 Nm), but on the other hand, pretty much all E-body muscle cars are heavy. Including the driver, 4,078 pounds (1,850 kilograms) is a lot even by modern standards considering that a 2022 Challenger tips the scales at 3,858 lbs (1,750 kgs) despite having a much heavier eight-speed auto and many safety nannies.

On the other lane of the drag strip, we have a tremendously cool Nova SS with the 396 engine. It’s not your average big-block V8, though, because this fellow is the much-desired L78 variant with a compression ratio of 11.5:1, a 780-cfm Holley carburetor, aluminum intake manifold, forged crankshaft and connecting rods, and the all-important solid lifter camshaft.

Rated 375 gross horsepower and 415 pound-feet (563 Nm) of torque, the L78 has been proven to make a little more oomph than Chevrolet said it did. It’s the same thing the Chrysler Corporation did with the 426 HEMI, but hey, that’s how U.S. automakers were before the Malaise Era swooped in.

Given this information, are you surprised the 396-cubic-inch Nova SS destroys the 426-cubic-inch Challenger R/T over the quarter mile? I certainly am not, and even though I’m a Mopar enthusiast since I’ve been loving cars, I’m honestly delighted by the Chevrolet’s straight-line performance edge. 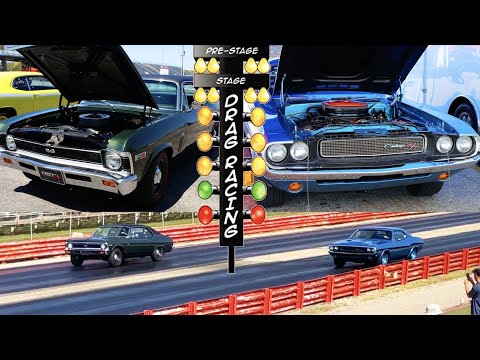