1 Murdered-Out Chevy Nova Is All Bark With an Extra Bite, Needs to Be Put On a Leash

5 Video: Ever Seen a Donk-amaro Do Half a Donut on 32s?
Car video reviews:
Coverstory

1969 Chevy Camaro Z/28 Gets Futuristic Widebody, Don't Mistake It For a Dodge

Many classic car aficionados with a secretive knack for GM muscle will undoubtedly consider the ‘69 Chevy Camaro Z/28 as one of the most beautiful ever built. And do not blame virtual artists for their one-sidedness... too much.
24 photos

If we are to be frank, it was only logical for the UK-based virtual artist better known as Carmstyledesign on social media to go down the vintage route once again. After all, the pixel master treated lots of modern incarnations of automotive legends to the CGI, futuristic widebody vision. So far, we have seen the S550 Ford Mustang, C7, and C8 Chevy Corvettes, the Chevy Camaro ZL1, or representatives of Dodge’s contemporary family, among others.

But just as 2021 drew to a close, the digital automotive content creator also wanted to envision a modern-vintage take on the original pony car. Thus, a 1967 ‘Stang got treated to a shiny widebody aero kit. As well as S550 cues and even some hints of C8 Corvette DNA, if we are not mistaken. In the early hours of 2022, another classic car was transformed into a restomod wonder. With a twist, of course.

This time around, the latter might be stemming from our imagination. The virtual artist has dabbled with the iconic 1969 Chevy Camaro Z/28 performance package. All the CGI expert’s usual suspects are present and accounted for. Such as the extreme widebody makeover complete with a dual-tone black-and-brownie atmosphere.

Or the decidedly modern internals, as hinted by the huge tire/wheel package, the massive, forged carbon brakes tucked behind them, as well as an always-cool transparent hood treatment. But there is just one big detail that’s nagging us. The pixel master seems to have recycled a prior idea used on one of Camaro’s archenemies.

That would be the modern Dodge Challenger that was made to look equally dual-tone widebody vintage by way of infusing it with third-generation B-body Dodge Charger characteristics. Was it a cloned idea or deliberate decision to have the front resemble a prior virtual project that’s notoriously highlighted on the artist’s YouTube channel’s header?

Update: The virtual artist has decided to share an alternate dual-tone view of this digital Camaro Z/28 project on his Instagram page. 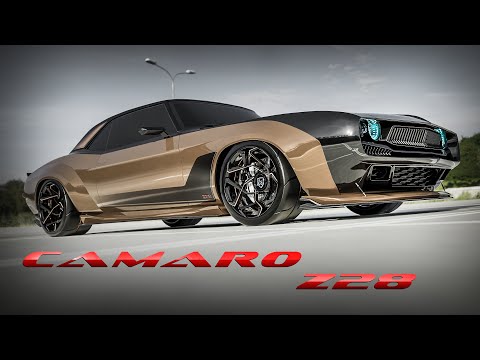