1 Engine Rebuild Made This 1968 Chevrolet Chevelle SS a Monster

5 Corvelle: A Corvette in a Chevelle's Body
Car video reviews:
Up Next

For custom car fans, big engines fitted under the hoods of this or that build are not necessarily news. But all must admit a 572ci big block, sitting in the engine bay of a 1969 Chevelle, is not something they come across every day.
31 photos

The car featured in the gallery above was built in 1969, when the nameplate was already a hit on the market. Originally, it is believed to have been fitted with the biggest engine available at the time for the SS, the 396ci (6.5-liters) big block V8 that developed 375 hp (SAE Gross).

That is a lot, by the standards of the age, but it isn’t enough of course for custom builders of more recent days.

This particular Chevelle spent more of its life – over two decades – in possession of a single owner, one who took his time in completely transforming the machine.

There are a number of changes made to it, both visual and mechanical, but the most important is of course the replacement of the engine.

The unit originally fitted on the car was swapped for another big block, this time one much larger in displacement: the colossal GM ZZ572 crate engine that started making the rounds of custom shops in the late 1990s.

As its name says, the ZZ has a 572ci (9.4-liter) in displacement, the largest crate engine available anywhere in the world. And not only that, but in this particular case it is linked to a five-speed manual transmission.

The engine’s output is breathtaking in this Chevelle: horsepower levels have been rated at 620 hp, while torque stands at 645 pound-feet (875 Nm).

There are some visual upgrades to match the hidden heart of the car, including a new black vinyl roof, new glass all around, and 18-inch wheels. The interior has been completely overhauled, down to the tiniest of details.

The monsterized Chevelle is for sale on an online auctions website. The tally at the time of this writing, 11 bids in, is $22,500, but that doesn’t meet the reserve, so expect it to go for much more. 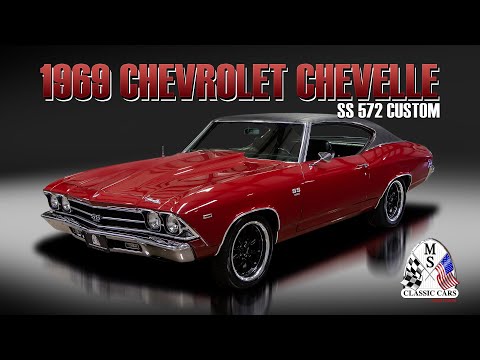