The Hoonicorn is built on the base of a Ford Mustang, but what if a 1969 Camaro SS was the starting point for the highly modified car that starred in the Gymkhana series? Well, now we do know, all thanks to The Kyza and his effort of rendering a 3D concept of one from scratch.
10 photos

The self-taught 3D concept artist has made numerous renderings of various vehicles over time, and through the video that is embedded below, we can see his process in turning a 1969 Chevrolet Camaro SS into an alternative Hoonicorn.

The artist mentioned that the 1969 Camaro is one of his favorite cars, which means that this is close to what his dream build might be. As Khyzyl Saleem, the artist who is known as The Kyza, has noted, you do not see that many modified Camaros out there. Feel free to take a look and get some ideas if you plan a restomod based on this model.

It is worth noting that the 3D artist got inspiration from various racecars based on the Camaro, as well as other builds from real life. The essence of some of those builds is then synthesized into a rendering of a 1969 Camaro SS that becomes the Hoonicorn in an alternate universe.

We suggest watching this video to be amazed by the level of detail that goes into rendering something like this. Spoiler alert: it is not easy, and The Kyza makes it look easy, but some parts of the work are not visible, and the process has been sped up a bit. In reality, it takes many hours of work, which is why we should appreciate the effort that goes into a rendering such as this one.

Sadly, it does not look like Ken Block's team will turn a 1969 Camaro SS into the next Hoonicorn even after seeing this video, as the American driver has since moved on to a different manufacturer, as you may know. 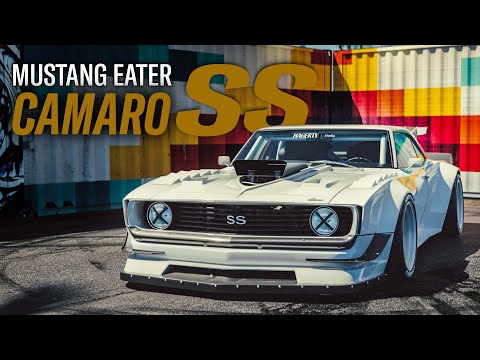