Ford introduced the GT option for the Mustang during the initial run of the original generation, and sometimes the “GT equipment package” gets referred to with the GTA call sign. It included the V8 engine option, easy-to-spot grille-mounted fog lamps, stripes, and even a different instrument panel. So, it’s no wonder that even today, people reminisce about them.
47 photos

Whenever going for a classic car, one has to wonder about the best option for you: a vintage ride with all the quirks and features of old days, a restored wonder, a restomod featuring modern amenities, or something in between all these?

This 1967 Ford Mustang GTA Fastback Tribute easily falls within the latter category as it’s a slick clone that could trick anyone into thinking that it's the original thing... until the car starts moving around to showcase its modern credentials.

It comes with the cool fastback profile, a stunning Wimbledon White with blue stripes paint job, a contrasting two-tone interior, four-wheel brakes, as well as a powerful crate V8 engine under the hood. These are the basic surprise highlights on offer, but this example only becomes even more enticing once we delve deeper into the details.

For example, the Wimbledon White hue has a high-gloss finish, while the Deluxe hood with embedded turn signals bodes great against the American Racing Torq Thrust wheels. A connoisseur might notice they’re not the same ones as back in 1967, the 17-inch set hinting at the upgrades hiding within the fastback body.

Inside, there’s a sea of blue to fall in love with, and the fresh build has neatly integrated a few modern twists. Those include the vintage-looking (but contemporary) AM/FM digital tuner with Bluetooth, which even comes with an added satellite radio controller for even more audio options.

The A/C has also been upgraded, just like the steering wheel column and the steering itself (still comes with the proper logo), hinting at the real reason why the odometer shows just a little over 3,042 miles—the count has been restarted once the customizations were complete.

Naturally, this GTA tribute doesn’t come cheap, as the Streetside Classics dealership is asking no less than $94,995 for this ‘67. Granted, it has a fresh 302ci crate V8 engine capable of delivering no less than 340 horsepower to the rear wheels. 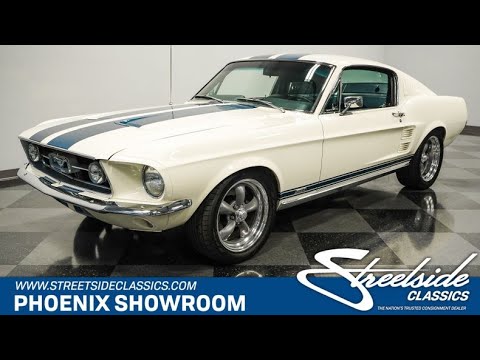