3 Snoopy Approves of This 1938 Pickup, Some Call It a Suicide-Door Fordbomination

1967 Ford Mustang Fastback "Copperback" by Ringbrothers Is up for Grabs

Nicknamed “Copperback,” this restomod build started life as a classic and entirely original 1967 Mustang Fastback from Arizona. It has since undergone two Ringbrothers workouts before landing in the possession of the current seller, Marc Shiliro’s MS Classic Cars from the small town of Seekonk, Massachusetts.
69 photos

Mike and Jim Ring, aka the Ringbrothers, are the perfect examples why people love the annual Las Vegas automotive extravaganza of SEMA. The youngest of seven siblings from a small rural town in serene Wisconsin, the two might very well stand for the Gibbs brothers’ Bee Gees alternative from the automotive industry. Such is their fame in their aftermarket line of work. And they very well deserve it.

Take this pristine restomod for example. OK, it had $2,748.23 worth of servicing and $600.00 in detailing from the current owner, but the bottom line is that Ringbrothers are the ones that initially nurtured this ‘67 ‘Stang back to modern life with loving care.

As such it became Copperback, a Copper Burnt Orange Metallic example with custom touches such as the new carbon fiber body panels, over 70 billet aluminum machined parts, 19-inch iForged alloys and a Roush Performance 427 cubic inch (7.0-liter) V8 under the hood.

The latter is good for no less than 560 hp and got mated to a Tremec five-speed stick shift and a Ford Currie 9-inch POSI rear end. Putting massive power to the pavement is not enough, though – unless you do it in style. And there is plenty going on for Copperback, with the Gemini Technology Systems carbon fiber composite hood and trunk alone needing around 400 hours of work.

Just imagine how many more man-hours went into the rest of the design, considering that Ringbrothers modified just about everything, starting with the entire lower valence, and ending at the new exhausts while even the original door handles got a “shave” for a smoother appearance.

Moving inside we can find some of the second-tour modifications Ringbrothers operated once the car was back in their shop four years ago for another string of customizations. It all starts with the brown and black custom upholstery and does not end with the Recaro bucket seats and Schroth four-point seat belts.

This is because the custom ride’s charm can also be appreciated under hard driving conditions when the Chris Alston Chassisworks Total Control front end shows its prowess alongside the front and rear Ridetech adjustable coil-over shocks. 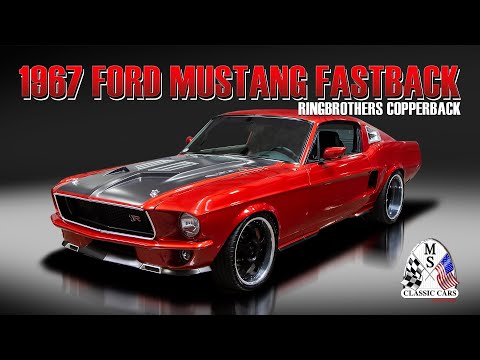