Easily one of the most recognizable automotive designs out there, the AC Cars/Shelby Cobra is also one of the most copied styles. Naturally, that begs the question: is it a real one or just a replica?
26 photos

No need to worry about authenticity here, on this occasion, because we know for sure this 1966 Shelby Cobra is just a lookalike built out of a Hunter replica kit. However, with a mere 1,700 miles (2,736 km) since the highly customized project wrapped up, it still sits proudly and is almost new in the inventory of Grand Rapids, Michigan-based Garage Kept Motors.

Remember, Shelby Cobras are one of the most coveted representatives of the classic performance car era, so the real-deal examples will easily trade for high six-digit sums during collector or auction events. As such, a well-done replica will allow a wider array of enthusiasts the opportunity to own their dream car, though no one should expect these to sell dirt cheap, either.

Instead, other highlights are becoming more important. For example, on this occasion, the ‘66 Shelby Cobra Hunter replica comes with subtle Gunmetal Gray with Charcoal Black Stripes and a matching Black interior attire. It does not necessarily seek to stand out in a Cobra crowd, thus it will rather prefer to chomp a bite out of any unsuspecting detractor when given the opportunity.

That will be an easy task. Especially when considering the extensive list of custom elements, including the hand-built tubular frame, 429ci Ford D1VE V8 engine, Edelbrock heads, Tremec TKO 600 5-speed manual transmission or the stunning “Ford 9-inch narrowed rear end with Detroit locker 4 11 gears, and triangulated 4-link suspension built and installed by stock-car racing legend, Johnny Benson, Sr.” And those are just some of the bigger strokes.

Many more are included in the lengthy description feature courtesy of the classic and modern used car dealership. Alas, the time has come to discuss the most sensitive entry point on the list: the asking price. Well, at least no one will argue that it is a tough nut to crack, at no less than $66,900! 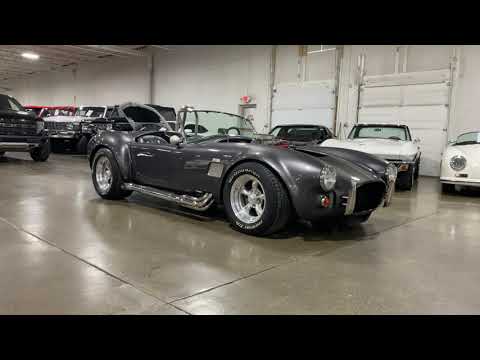