3 A Very Affordable Toyota Takes On a Limping Rolls-Royce, Both Get Slammed by a Maybach

Well, sort of, as we are actually dealing with the Mid-Michigan Motorplex in Stanton, Michigan, where the videographer behind the Cars and Zebras channel on YouTube brings us feisty yet vintage GM action in the form of a 1966 Chevy Chevelle versus Chevrolet Nova brawl. But it is no ordinary classic muscle car fighting, either.

Instead, these two great representatives of the late 1960s are both of the Super Sport variety and have the 396 Turbo-Jet L78 V8 engine on board, complete with 375 horsepower and 415 lb-ft of torque (563 Nm). The differences are subtle, yet they do exist. For example, the Chevelle is just 14 lbs. (6.35 kg) heavier than the Nova, but the major departure from the norm is that one is manual (Chevelle SS), and the other has an automatic transmission (Nova SS).

But, as far as we are concerned, it is still very much up to driver skill to see who comes out on top in this Pure Stock Muscle Car Drag Race series encounter. And, by the end of the video embedded below, you’ll see that theory proven. So, the first skirmish unfolds at the 3:08 mark after both cars get a quick presentation. The apparent winner is the Nova, given the 12.35s to 12.51s, but it could have also crawled to the finish line because the Chevelle driver ran the red light.

Round two kicks off at the 3:56 mark with the Chevy Nova way ahead of the pack but it too had, run the red light, so the Chevelle SS just took its sweet time and did not put out an effort. Thus, it was all down to the last attempt, at the 5:10 mark, where the fate of this encounter hung out in sweet factory stock muscle car drag race balance. But we are not going to spoil the fun of finding out for yourself who won… 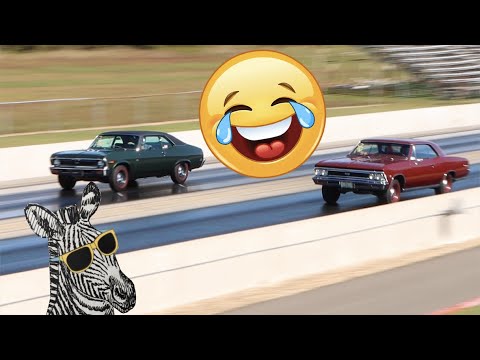