5 There's Only One 1966 Shelby GT350 Convertible With Original Engine, This Is It
Coverstory

1965 Pontiac Hurst GeeTO Tiger Was Once a Gift, and Songs Were Written About It

Home > News > Tuning
Daniel Patrascu
If you had lived back in the 1960s and could say how many times the word “tiger” was used in the GeeTo Tiger song by The Tigers, then this specially prepared Pontiac could have been yours. It can still be, provided you bid for it during the Mecum Indianapolis auction in June.
22 photos

Back in the 1960s, the battle between American carmakers was at its peak, each trying to position itself in the hearts of customers. These battles raged on all fronts, from production to advertising, and at times they had surprising results.

What you see in the gallery above is a special breed of a 1965 Pontiac GTO. So special in fact, that there is no other car like it anywhere in the world.

It was devised by Pontiac advertising executive Jim Wangers, Royal Pontiac, George Hurst and Petersen Publishing as the center of one of the most impressive campaigns of that decade. Its goal was to help boost sales of the hot GTO even further, and for all intents and purposes it did.

Backed by its own soundtrack (available below), and countless advertisements and promotions, the car was offered to a 19-year old as a prize in a contest that required participants to answer why they’d like to win the car and how many times the word “tiger” was sung in the accompanying tune.

Considered by specialists “the most significant GTO of all time,” this particular car came with no less than 28 unique factory options, including special gold wheels, Gold paint, and gold-plated shifter. Under the hood sat a tri-power 389 ci (6.4-liter) V8 engine capable of developing 360 hp.

The epitome of the GTO line has changed hands repeatedly since its creation, and now is for sale during the above mentioned event. It won't be alone, but accompanied by a wealth of documents, including magazines and advertising clippings from back in the day, period photos, and even a scale replica. 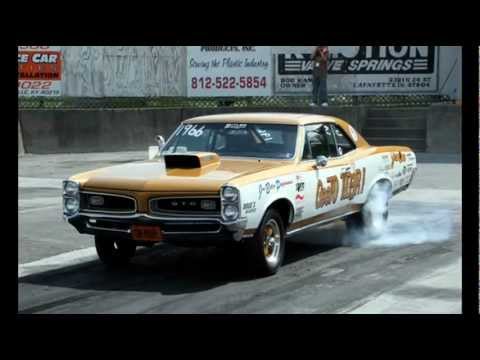