The Mustang is "just" a muscle car today, but we think it had a huge impact on cars as a whole, bigger perhaps than the VW Beetle. It was such a monumental success in the 1960s that it inspired several "import" brands to create cool coupes/fastbacks of their own.
6 photos

For example, the Toyota Celica was created the same as a Mustang by creating a sexy coupe body for a normal high-volume sedan. They called it a Liftback, but a 1974 Celica looked very similar to the Fastback you know and love, down to the taillights and windows.

Nissan was all about competing in America, and it really made a name for itself with the 240Z, which had four-wheel independent suspension and disk brakes. Its SOHC layout and four-speed manual made it perfect for the emissions restrictions that were such a buzz-kill for muscle cars.

Of course, Nissan has other sports car series that made us fall in love with the brand. The RB26DETT was produced between 1989 and 2002, and the 2.6-liter engine is just as famous as the Skyline GT-R models it powered.

There's plenty of stuff to geek over, like having a twin-turbo setup from the factory spooling up in parallel. It features six individual throttle bodies, big injectors, and it's been said it can handle over 500 horsepower on stock internals too.

Even if you ignore all that, the RB26... well, it just looks gorgeous. That cover is a work of art and immediately sets it apart from other Japanese powertrains and American ones.

It's pretty common to swap the RB26 into other cars. Because the body is way cheaper than a GT-R and ideal for drifting, many S15s and Scions FRSs go sideways using this old GT-R technology.

But seeing an American car powered by such a Japanese engine is not common at all. And that's why it's impossible to forget the 6-cylinder monstrosity in Tokyo Drift. In the movie, Sean Boswell is a teenage high school student who looks way older than he should and ends up moving to Japan to avoid jail back home.

Now, not all the movie Mustangs had actual RB26 engines. It was more practical to use Ford 430 Windsor V8 motors in most shots, apparently. And if you want a JDM pony built right, you've got to do it yourself, which is exactly what YouTuber TJ Hunt is up to right now.

His hands aren't getting dirty, and the project isn't completed. But it's fun to see how they install the exciting kind of Mustang 6-cylinder and how much room is left under the hood. Maybe they can put a 2JZ on the side. 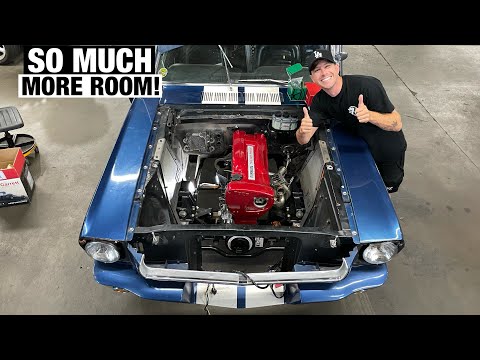