Ever seen a Split-Window C2 Chevy Corvette restomod with Lamborghini design traits and a 5.2-liter V10 engine swap? Well, an upcoming SEMA Show edition is going to bring you the pleasure of checking out in person this virtually crazy transformation.
15 photos

“America’s sports car” purists might want to look away. The ideas of the people behind the corrupttbuilds and American Legends Builds accounts on social media are better left unknown. After all, they’re the same folks who dared stuff a Ferrari engine inside the body of a 1968 Ford Mustang and then just called it “Corruptt.”

Now they fancy another American-Italian communion of a high-powered restomod nature. And the object of their affection is a derelict second-generation 1964 Corvette Coupe with a split rear window. Sure, it’s one of the legends, and sure it’s going to upset some people. But the rest of the world is probably going to be mesmerized when it’s going to look in real life exactly as pixel master Karan Adivi imagined it.

So, what we have here is another virtual-to-real project. The twist is “Decepttion” is not going to look like your average restomod. It’s not even going to look exactly like a modernized C2 either, as the CGI expert relentlessly worked for weeks on end with the customer to deliver the vision of a classic Corvette sprinkled with modern Lamborghini styling.

Right now, the build is clearly in the preliminary stages, with the Chevy still looking sad and abandoned... even though it now features a feisty 5.2-liter Lamborghini V10 companion. Anyway, judging by the sponsorship forces involved, this one is going to be an epic SEMA showcase... When it eventually gets the restored and modernized design lines, the Roadster Shop IRS chassis with cantilever suspension, as well as the new Italian heart.

Right now, according to the description on social media, it’s programmed for a real-world apparition at the 2023 SEMA Show... so I guess we’re in for a long wait until the crazy dream jumps from virtual reality into the real world. But it’s probably going to be worth it! 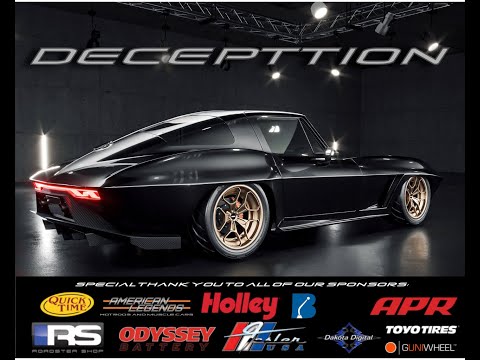