1 Fleeing C7 Chevy Corvette Hits 130 MPH on Highway, Gets Sideswiped Once in Town

2 1980 Corvette Parked Since 1991 Looks Nasty Outside, Hides a Pure Secret Inside

1963 Corvette Grand Sport No.2 Remains Feisty Even as a Rolling Piece of History

Back in the early 1960s, when it was time for the Chevrolet Corvette to switch generations for the first time, its legendary patron—Zora Arkus-Duntov—also initiated a secret lightweight motorsport project based on the then-new 1963 Corvette. Alas, GM head honchos wanted nothing with it, and so the Corvette Grand Sport was killed in its infancy after just five examples were built.
15 photos

These were initially intended to compete against the era’s heavyweights, particularly Ford and Shelby, but the iconic 1963 Chevrolet Corvette Grand Sport never managed to get homologated for international Grand Touring races. Incredibly famous for what may have been, but never was, this version is basically a piece of automotive history.

Apparently, all five examples have survived to this very day, and of particular importance is the No. 2 Grand Sport Racer that sits proudly in the permanent collection of the Simeone Foundation Automotive Museum in Philadelphia, Pennsylvania. It’s equipped with the most famous engine of them all, the small block 377ci V8 engine (rated at 550 hp back in the day), and even has a replica body and a spare mill commissioned by a former owner for racing.

Interestingly, it’s the only Grand Sport that’s original and unrestored. And it’s also in running condition, which brings us to a recent video (embedded below) from the museum that showcases the Roadster “stretching its legs” during one of their great Demo Day events. Yes, believe it or not, the museum doesn’t hold this ‘Vette as the prized garage queen it really is and occasionally brings out this multi-million dollar prized possession within inches of the general public.

And we have to say that it’s not just doing some mild revs of the monster engine. Instead, after giving the chills to some members of the audience (at the 0:45 mark) when it comes to life, the Chevy even goes for a handful of flybys to further delight the small crowd gathered in the museum’s parking lot. 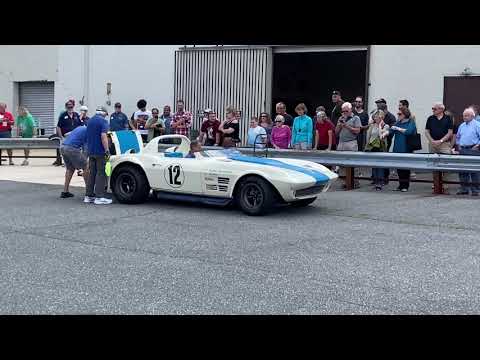