1960 AC Greyhound Found Under Piles of Junk Gets a Glow-Up, Is a True Sleeping Beauty

In the world of collectibles, this is perhaps the holy grail: a very rare car that is also a limited-edition classic, that is also a barn find that has been restored, but remains highly original. They call it the “Sleeping Beauty” 1960 AC 2+2 Greyhound.
12 photos

Barn finds are the unicorns of the automotive world, as well as happy-ending stories where prized vehicles believed to have been lost or of whose existence the world never knew are recovered and, through careful and professional TLC, restored to their glory days. Everybody loves a good comeback story, and this one could star you as protagonist, on the off-chance you happen to have between $77,000 and $90,000 to spare.

A gorgeous, low-mileage and sympathetically restored 1960 AC 2+2 Greyhound will be crossing the auction block at the end of next month. It was discovered more or less by accident by the seller, hidden under piles of junk in his father-in-law’s garage, where it’d been “stored” for more than four decades. Once used for racing against Aston Martins, it was now used as shelving for the kind of useless stuff most of us tend to store in the garage. It was forgotten and neglected, and it showed the signs of both accordingly.

These days, after completing restoration in 2022, the Greyhound looks as good, if not better than it did back in the day, before 1978, when the previous owner got a new car and decided to retire this one. It now wears several layers of Put Your Sunglasses On Red that replaces the original AC Rosso Chiarro, which did not have an exact color code and, as such, could not be replicated. It also sports much of the original (now patinated) light leather interior, but with new contrasting red carpets.

Powered by the BMW-derived Bristol OHV 2.0-liter straight-6 engine, this Greyhound has just 43,000 miles (69,201 km) on the odometer, and comes with a racing history on UK circuits at club level. IN Racing’s Ian Nuttall oversaw a £21,000 ($27,000) full engine rebuild, with the invoice included in the documentation provided with the vehicle. The engine runs well “and the car is a delight to drive,” the owner says.

The 2+2 Greyhound was introduced at the London Motor Show in October 1959, and was in production only briefly, until 1963. This is one of just 83 examples ever built at the AC Cars’ Thames Ditton factory in Surrey, and according to Silverstone Auctions, one of the most desirable units available today.

“This has got to be one of, if not the finest example of a Greyhound to come to market recently,” the auction house says. “With the striking looks of a DB4, 75 per cent of the performance, 10 times rarer, yet only 20 per cent of the cost, it looks remarkable value at today’s guide price.” 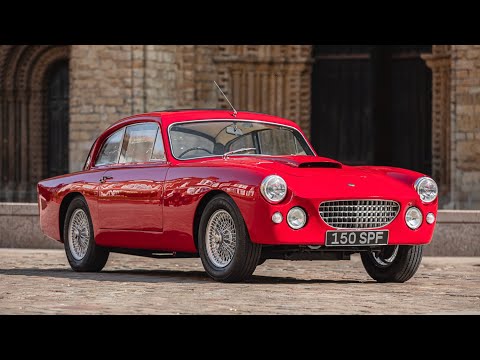